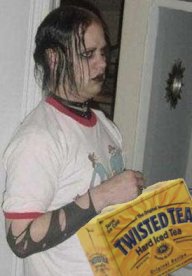 I'm sick of you mocking me because I drink Twisted Tea. Every time I visit your store to purchase a six-pack of Twisted Tea you always snicker or make some snide remark to one of your coworkers when you think I'm out of earshot. You apparently think my tea and I are on display for you to ridicule with your childish high-school mentality. I assume you were probably one of the "jocks" in school who relentlessly persecuted people like me for being different, and see this current abuse as a continuation of that role.

Just because I drink alternative tea doesn't make me some kind of freak. Some people need a darker and more twisted tea to reflect their outlook on life. This may come as a shock, but not everyone is happy and well-adjusted like you are. Some people have to endure intense and indescribable torment every day of their lives, and have no outlet for their misery other than the tea they drink. Twisted Tea's fiery logo with its skewed and vaguely metallic letters perfectly evinces my anguish and depression. And the .0003% alcohol content helps numb the pain I feel after spending the entire day being laughed at by people like you.

I guess you'd prefer it if I bought a more popular tea like Lipton or Snapple, tea whose bright flowery bottles paint a whitewashed, simplistic version of life, free of the cruelty and injustice that Twisted Tea so boldly portrays. You'd rather I marched in lockstep with your corporate tea hegemony and became a mindless consumer zombie incapable of independent thought. My tea purchases threaten your status quo, so of course you single me out for ridicule. Anyone defying the mass majority must be squelched.

I've noticed you don't laugh at girls who buy Twisted Tea. It's typical of our society to have this sexist double standard. Our dimorphic gender system requires that men be logical and women emotional. Women are allowed to express their feelings because it helps us pigeonhole them into a narrow gender role. But if men show emotions they're subject to mockery and derision. By drinking a "feminine" emotional tea, I'm violating your patriarchal gender binary and forcing you to question it. 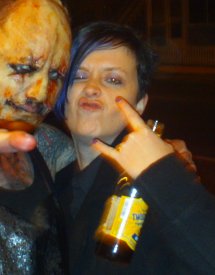 Are you familiar with Freud's theory of projection? It says that the people you dislike represent things you dislike about yourself. Maybe your hatred of Twisted Tea drinkers reflects your own inability to accept your feminine melancholic side. Your abuse of me is really just a rationalized self-loathing.

Or maybe it's a reaction formation. You secretly long to be like me, to be able to express through your beverage choice how you feel on the inside, but are afraid of being subjected to the same bullying you put me through. So in order to avoid cognitive dissonance you sublimate your admiration into hate.

Whatever the impetus for your harassment, I'm asking respectfully that you stop it. It hurts my feelings and promotes a general attitude of intolerance toward outcasts in society. If you don't cease your callous actions, I'll be forced to contact the legions of Twisted Tea fans and tell them about your abuse. Like me, they aren't afraid to "be a little twisted," but unlike me they may not be so polite and forgiving. Think about it.