Thursday, Sep 09, 2004 by Rich "Lowtax" Kyanka (@TwitterHasBannedAllMyAccountsEver)
Know of an awful site? Send it to us and become a hero!

Hektik DEATH RAP / WICKED SHIT NY style, submitted by Stickman. Ever wonder what it would sound like if a Muppet started cursing and trying to rap? Here's your answer! A couple of fat white kids who pose for pictures in front of their mom's screened in door have decided they'll attempt to cash in on the resounding success of the Insane Clown Posse with their very own MURDER DEATH KILL BITCHES HOES rap band. Much like all this dirty south fat white kid rap shit, it was recorded on a Fischer Price tape recorder and features various doughballs trying to use their big boy voice while describing how much death and terror they plan on reigning down upon their eighth grade classmates. Oh yes, and they plan on pimping the bitches and hoes too. That's after the killin. 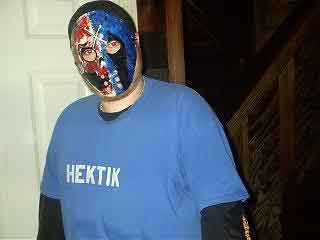 How would you describe yourself? A Hardcore Thug, Mashin on yo face, hit me with a car and ill beat you in the head with a crowbar untill you bleed out of your ears type of guy.

What do you like most about 'Hektik'? I like being able to get my ideas and views to all these ignorant mainstream fans. Someone needs to pull the US Culture outa the gutter and I'm proud to do the shit.

Oh Hektik, what WON'T you say!

PS: Be sure to check out all their kickass mp3s, which is just like awesome professional music except they are neither awesome nor professional. Nor music. Just wait until mom and dad see what you've done to their hockey masks, young men! Sigh... white people just shouldn't be allowed to rap unless they are Third Bass.