Tuesday, Sep 07, 2004 by Rich "Lowtax" Kyanka (@TwitterHasBannedAllMyAccountsEver)
Know of an awful site? Send it to us and become a hero!

Educate Yourself, submitted by Liquid_Beaver. The Internet is a giant break room for insane people with too much time. If you want proof, hell, you're looking at it right now. Only on the Internet can bearded wackos write 200-page long conspiracy theories conclusively proving that Bob Barker rapes them every single night and emails the videos to Bill Clinton who then uses them to power his chemtrail-spewing time machine so he can visit the Greys on Planet X (which is dangerously close to the Reptiloids on Planet Y), and then be sent supportive emails from people who think the exact same thing. Everybody is out to get us! Nothing is as what it seems! The hunter has become the hunted! He's a good cop gone bad, framed for crimes he didn't commit! No officer, she told me she wasn't underage! The Greys made me do it!

I haven't noticed chemtrails in the skies over Costa Mesa and Irvine California since early May, 2004. Even when they were spraying in the previous months, I noticed that the chemtrails couldn't stick for very long before they disappeared.

The sickening overcast, whiteout, and smog-laden air produced by chemtrail aerosol bombardment that aware observers around the nation have become accustomed to seeing for the past six years no longer survive in Orange County or Los Angeles County, California. I'm also confident that this improvement is occuring in other parts of America and likely the world as well.

The chemtrails are literally being neutralized, 'eaten', and destroyed by huge, living and intelligent airborne creatures that the ancient Greeks identified as Sylphs and photographed by Trevor James Constable in the 1950's and 60's. Trevor called these large plasmoidal (unseen by the naked eye) creatures "critters" in his 1976 book, The Cosmic Pulse of Life. He was able to capture them on film by using infrared film or he used ordinary color film with an 18A filter over his camera's lens. This filter blocks all normal wavelengths of light except the infrared range. 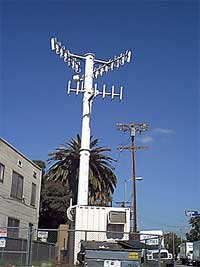 The Holy Handgrenade can mitigate energies intended for Mind Control and other nefarious purposes that are being radiated from underground facilities such as Montauk, the HAARP project, microwave GWEN towers and affiliated ELF microwave arrays being added to existing high voltage towers (springing up like daisies all over this country), underground military bases, masonic lodges, places of satanic ritual activity, etc. Don has maintained a journal of his and Carol's experiences while on the road and even traveling abroad to neutralize or mitigate the DOR energy from ELF towers, undergound bases, repitilian hives, vortexes, etc. I've titled these incredible journal entries as The Adventures of Don &Carol Croft. I strongly recommend reading them, as they offer a wealth of valuable insights and information, to say nothing of their excitment, drama, and humor. Don Croft has also designed a modified 15 Hz zapper (personal bioelectrification device) that incorportates an orgone generator as part of his zapper. He calls it the Terminator. While engaging the Bad Guys, Don utilizes a pulsed crystal device known as a Succor Punch (SP) and a more powerful version of the SP called a Powerwand. You can make your own or obtain these devices ready made from me or others..

You know, with the hundreds of millions of evil government / alien / robot death devices that have been constructed just to murder each and every one of us in the most brutal and agonizing ways possible, it's a wonder that we're all not dead. I mean, jeez, just read that paragraph above here; we're constantly under attack from the government, microwaves, towers constructed either for or by elves, the Freemasons, Satanists, aliens, hives, vortexes, and just an absolute mess of underground crap much like the stuff featured on the hit non-fiction movie "Tremors." I guess one of the main questions that arises here is why so many different organizations and interplanetary shock troopers are interested in taking over these peoples' minds. If I was going to take over somebody and use them for my nefarious purposes, I'd probably target somebody with a functional brain, perhaps even somebody who doesn't spend their entire day curled up into the fetal position in a corner of their basement, physically trying to avoid the New World Order laser beams that orbiting satellites shoot into their groin.

The government is broadcasting mind control rays via cellphone towers! They are commanding us to download and play "Bejeweled" on our Sprint PCS phones.

AIDS can be cured by electrocuting yourself! Time to start bussing the residents of downtown San Francisco into the electric chair.

Vaccines are killing our kids! Nobody knows what's REALLY going on except people on the Internet! Everybody else is lying; the Internet is the only place you can turn to when you need to know how to shock the AIDS right out of your body!

The New World Order controls everything everywhere! Wait a minute, I thought the Jews controlled everything! Wait kooky conspiracy theories am I supposed to believe here?

Good news though: they are winning their fight against the New World Order!

Very nice to speak with you yesterday, thanks for calling, and what timing while Alicia was here! She taught us all how to make TBs and HHgs and we deactivated all of our implants.