Saturday, Dec 25, 2004 by Reid "Frolixo" Paskiewicz
Know of an awful site? Send it to us and become a hero!

Nero Atlanta, submitted by Baby Jesus. LARP, or "live action role playing" is probably the most nerdy thing you could ever subject your body and mind to. I'm going to make a bold statement and say that it's even worse than dressing up at a Star Trek convention. Scientists have studied the LARPer mind for years, performing dissections and vivisections on the subjects captured with Kit Kat and Doritos traps. They are missing a fundamental part of the brain that tells you when you are going beyond being just a fan of fantasy, and start duct-taping plastic swords and raiding your mom's dresser. Some in the medical community think there is no hope for these lost individuals, that once you LARP you never come back. 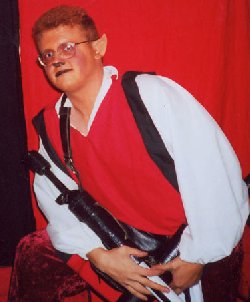 I'm an Elf/Cat ranger! My mom doesn't pick me up for another few hours so lets hunt some orcs he he he he.

After looking at the pictures, I'm apt to believe them. On the other hand, haven't these poor souls suffered enough torment from school bullies, and shouldn't we be happy that they have found something that brings them joy and friendship? The anwser is no. Just like when a good friend needs your tough love to beat a vice like alcoholism, the proper thing to do is to relentlessly mock these people so that they still will have a chance to return to a normal life. Most of them are too far gone in a world of flimsy fantasy and chubby gallivanting, but with some heavy sessions of satirical mimickry and violent deprogramming, a few of them can be saved. Adopt a LARPer today.