"Ants are pretty amazing when you think about it," muses FYAD ant enthusiast paraone. You know, I thought about it, and he's right! Ants are on everyone's mind this time of year, not literally, because even though ants crawl across your scalp throughout the summer, when you're asleep and sometimes when you are awake, there is skin between their legs and your actual brain. But figuratively! You can follow paraone on Twitter; i bet he tweets about ants and also other cool topics! The images in this educational update are from Russian photographer Andrey Pavlov's "The Fantasy World of Ants," as seen in The Telegraph; thanks to gobbles for sharing that link!

There are lots of facts about ants that average people just don't know! How many holes does an ant have in its body? How much do ants get paid? It's questions like these that drive mankind to wonder just what it is that makes ants tick. Scientists and philosophers alike have pondered for years on the secretive nature of ants, and the facts they have learned may blow your mind, and make you give a second thought next time an ant is crawling on your picnic basket looking for larvae fuel. Once you find out more about ants, you may just let them grab that crumb instead of crushing their little ant bodies and sending their little ant ghosts into the beyond (ant heaven). Ignorance breeds cruelty and violence. Educate yourself! Join me on an adventure into Amazing Ants Facts! -- paraone

Ants are pretty amazing if you think about it 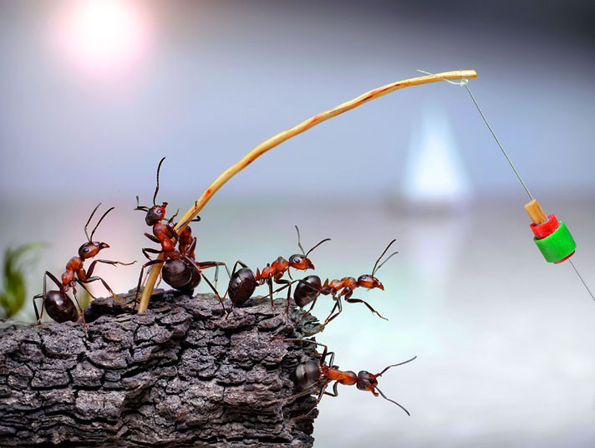 nightwheat stalker posted: dont let this whimsical romanticism blind you to the truth: its hard work being a ant

"are you an ant or a CAN'T??" -- something cool that ants might say, to encourage each other to make it through the harsh working day of an ant

ants have jobs. if you dont have a job you're worse than ants (although ants are pretty good)

an analogy that helped me to understand the ant, is when i noticed that they are similar in a lot of ways to the creatures from the 1991 Maxis videogame, SimAnt, which coincidentally are also called ants

most ant pussy is moist

it would be really messed up in my opinion, if ants were scaled up to the size of people, and they could walk through walls and pick us up with their mandibles and make bullets bounce from off of their thick exoskeletons.

thanks i had noooo plans of sleeping tonight

a very small ant bit my weiner off with ease

dick ants are NOT very nice

true, but they get the job done, when it comes right down to it.