John Kerry is Unfit - The Series

John Kerry is Unfit - The Series, submitted by nevermath. The absolute best thing to come out of the 2004 elections was not the death of John Kerry or the crowning of George Bush as our glorious God-King, but rather these horrible, horrible cartoons. I cannot begin to tell you how amazingly awesome these cartoons are, so I insist that you look at them yourself. 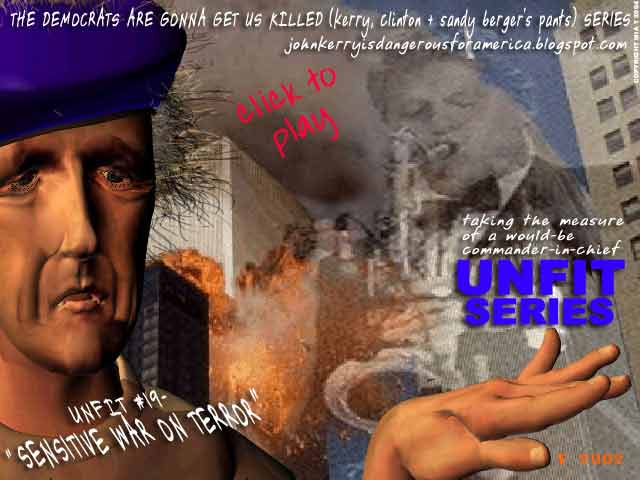 Someone went to all the trouble of making 3d animations of John Kerry and other democrats and then created horribly crude Flash cartoons around those animations. When I say crude I don't mean in the vulgar sense, but rather in the "third grader attempting serious art" sense. These fantastic shorts are amazingly creepy looking, not to mention violently ugly and poorly made. But that's what makes them funny and the best thing to come out of the 2004 election. In one of them, a 3d animation of John Kerry's beret-clad head talks to a cell phone operator speaking in Spanish. In the background Bill Clinton playing a saxophone is superimposed over an exploding World Trade Center. It's like Bill Clinton is somehow sounding one of the cataclysmic trumpets from Revelations! If that's not what political cartoons are all about, I don't know what is. Do yourself a favor and see what free speech is all about when put in the hands of complete idiots. As an added bonus, you get the thrill of seeing someone take mainstream politics seriously, believing every piece of bullshit their favorite political party spews out.