Tuesday, Aug 02, 2005 by Jedidiah (@notoriousamoeba)
Know of an awful site? Send it to us and become a hero!

Brian's Prediction, submitted by Daft Neophyte. Meet Brian. Brian’s dreams are haunted by psychic visions of amusement park disasters and disturbances at Wal-Mart. Here is one of Brian’s predictions from July. Note how it’s in the form of a stick figure drawing. A psychic stick figure drawing. 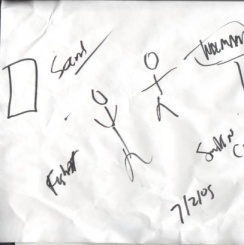 A man smoking a cigar in a Wal-Mart store starts yelling and throwing objects when he is told to put the cigar out by a Wal-Mart customer. The incident escalates into some sort of fight with Wal-Mart employees and customers.

The amazing part of this site isn’t the predictions themselves but the fact that this guy has the time and imagination to draw and interpret his wacky dreams. He doesn’t even let his complete lack of artistic ability stand in his way. I encourage everyone to donate to Brian’s site so he can continue bringing us badly drawn prophecies of impending doom.
Know of an awful site? Send it to us and become a hero!