Thursday, Aug 04, 2005 by Reid "Frolixo" Paskiewicz
Know of an awful site? Send it to us and become a hero!

Liberality For All, submitted by Natiffany. When I first saw this site, I thought that it had to be a joke or satire site, but the more I read it and looked into it, the more unsure I was about it’s validity. I mean even G. Gordon Liddy is endorsing this comic and doing a few radio interviews about it. Here is what this insane comic is about from the website:

“America’s future has become an Orwellian nightmare of ultra-liberalism. Beginning with the Gore Presidency, the government has become increasingly dominated by liberal extremists. The New York City faction of F.O.I.L. is lead by Sean Hannity, G. Gordon Liddy and Oliver North, each uniquely endowed with special abilities devised by a bio mechanical engineer affectionately nicknamed “Oscar”. F.O.I.L. is soon to be joined by a young man named Reagan McGee.

Reagan was born on September 11th, 2001. He is the son of a NYC firefighter whose life was spared by attending his son’s birth. Reagan has grown to manhood in an ultra-liberal educational system: being told, not asked, what to think. With personal determination, which alienates him from his contemporaries, he has chosen the path less traveled…the path to the Right.

Two decades of negotiation with the U.N., and America’s administration of 2021 (President Chelsea Clinton and Vice President Michael Moore), has culminated in a truce with fundamentalist Islamic terrorists, or so America is told.” 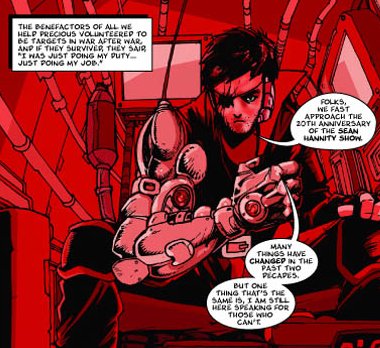 Either it is a hilarious joke or a glimpse into the warped mind of ultra-conservatives who think they are being persecuted. Really I don't care, this comic is awesome for all the wrong reasons.