Duamutef's Pit of Iniquity, submitted by STINKBAGZ. Speaking of comestibles, Duamutef's site is - in a word - fucking amazing. It features dozens of drawings of women being digested in stomachs, an equal number of Photoshops and not one but two GAMES. If you ever wanted to know what it would be like if Gandalf could eat Arwen and then poop her out, then come to the amazing fantasy world of "Duamutef's Glorious Vore RPG." 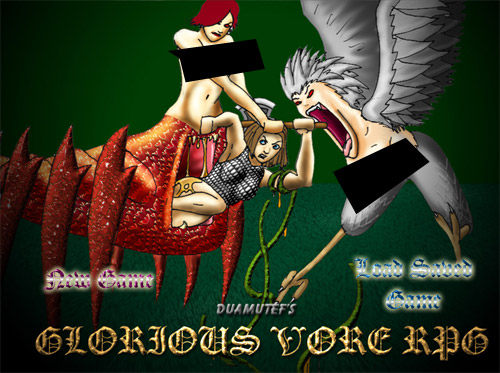 This innovative RPG is the first ever where you can be eaten, gradually digested and then shit out by every monster! Zelda had a few monsters that would do that, but in this game all of them try to swallow you whole! There is also some sort of card game like Magic only with women being eaten and digested. That is pretty much the same as Magic the Gathering if you really think about it.

By the way, look forward to a review of this game in the near future. I downloaded it and it is breathtaking.