Rap Snacks, submitted by Hamburgula. Have a hankerin' for some true hip-hop flavah but don't especially feel like licking the back of a rapper named Snoop Master Qube to get it? Ever hear a rhyme so dope you wanted to stick it in some onion dip and crunch it around in your mouth? Well, you're in luck, because the music of the streets is now available in potato chip format. Introducing… RAP SNACKS! 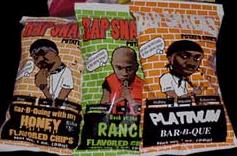 You'd think after the Nintendo Breakfast Cereal, Urkel-O's, and New Kids on The Block pasta, people would think twice before producing junk like this. Sigh.

In the near future Rap Snacks Company will be administering a 900 number for artist to show off there skills. Coming before March 2001

I think I speak for the general population when I say, "no really, take your time with this 900-number thing, guys. Don't rush on our behalf."