Jimmy G, submitted by Fragmaster. When I first visited this site, my first thought was "holy shit this looks like Something Awful". After a few seconds of staring my brain finally emerged from its opium torpor and repeated "holy shit this IS Something Awful". Ultimate internet master thief "Jimmy G" has ripped SA's code, he's ripped SA's content, he's even rippe SA's hosted sites. This isn't some lame knockoff, this is the genuine article, just replace every occurence of an SA reference on the site with "Jimmy G". 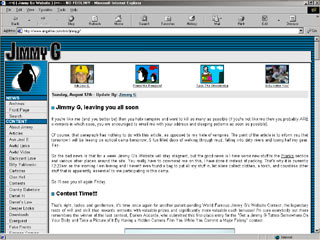 So the bad news is that for a week Jimmy G's Website will stay stagnant, but the good news is I have some new stuff to the Pranks section and various other places around the site. You really have to commend me on this, I have done it instead of packing. That's why it is currently 12:23am on the morning I am leaving and I haven't even found a bag to put all my stuff in, let alone collect clothes, a torch, and countless other stuff that is apparently 'essential' to me participating in this camp.

No you're not seeing double, no this isn't some magic trick with mirrors and smoke and some large-breasted woman dancing around to new age music, although I wish it was. Jimmy G has ripped off nearly all of Something Awful, having only enough creativity to change the name "Cliff Yablonski" to "Billy Yablonski". The paragraph quoted above is one of only maybe a half dozen original paragraphs on the entire site. He's a super guy!

Hey folks, Jimmy G has a guestbook that he would like you to sign, so go ahead and please the Christ out of that creative genius. Actually it appears some of his fans might have already broken it, those crazy cats!

This just in! Jimmy G has sadly realized the error of his ways and has removed his site.