Valley of Vegeta, submitted by Captain Ginyu. I hate Dragonball Z, I've only seen maybe half an episode but it's one of those things I just instinctively know is the bane to mankind. It makes "Go Bots" cartoons from when I was a kid look like deeply moving epics of raw human emotion on a level with "Shoah". Well, this guy likes Dragonball Z. A lot. A scary amount. He even has a long winded rant about how bad the live action movie of it is compared to the cartoon series, which is obviously off in a league of its own. 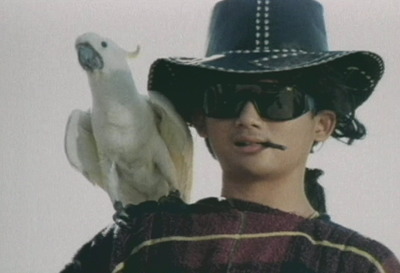 After I finished wiping the tears of laughter from my eyes, I discovered that damn parrot is supposed to be Puar. Yes, Puar now has feathers. I guess that would explain how she flies and talks. They changed her name, as well. Introducing : Snow White! I'm not sure which is worse, Snow White, or Sparkles. Sparkles was the name given to Puar when the Dragonball pilot episode was released in America in the 80's, before Funimation bought the right to screw it up instead.

Son of a bitch! They totally fucked up Puar's character, now he's a fucking parrot and he lacks all the emotional resonance he had in the animated series. I mean next thing you know they are going to turn Midkfo into a giant bear and Llllfjdllere into a sentient cloud of chlorine gas. The power ups are totally lame in the movie too! Only like half of the movie is devoted to them yelling and powering up, as opposed to the full 2/3rds like it should be and like it is in the TV show. They dropped the ball on this one!