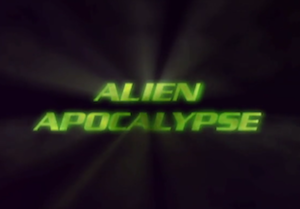 Overview: Bruce Campbell apparently always wanted to star in Planet of the Apes, so he signed up for this movie, which is that except it's giant bugs instead of apes, and also everything else is much stupider in every way.

The Case For: It's a made-for-TV movie, which leads to the best part of many scenes being the fade-out where the commerical break was supposed to go. 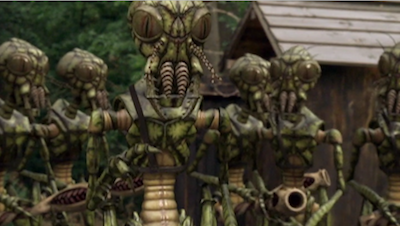 At last, our paths cross with Z-movie all-star Bruce Campbell. Honestly, we weren't expecting to ever get to review a Bruce Campbell movie, because despite (or because of) his penchant for starring in the weirdest schlock he can find, Bruce always seems to dive in with enough scenery-chewing gusto to drag the entertainment level up past the dreary sub-basement we're usually allowed to inhabit. And he does give even Alien Apocalypse the old college try:

That's the last scene of the movie, and you're welcome for us spoiling it so you don't have to ever consider watching Alien Apocalypse.

If only the entire movie consisted of Bruce being hosed down with factory-reject Nickelodeon Gak(tm) while making a series of faces like he's passing a golf-ball sized kidney stone made of pure Acting, maybe we wouldn't be here now. Instead, we're treated to a "Sci-Fi original" which is anything but, consisting mostly of half-remembered ideas stolen from better movies and just jammed together randomly like someone was solving a jigsaw puzzle with a hammer. The main plot revolving around astronauts returning from deep space to find an Earth where the human population has been enslaved is verbatim Planet of the Apes, of course, but there are lots of other weird examples, like a little Butch Cassidy and the Sundance Kid-style cliff jumping to evade bounty hunters, and even an "I am Spartacus!" scene towards the end that accomplishes nothing[1] other than reminding us we could be watching a better movie.

This is one of those films where we have lots of questions, and every question just begets more and stupider questions which will never be resolved to anyone's satisfaction until the heat death of the universe. As the movie opens, Bruce and his fellow astro-jockeys have just returned from the "Probe Mission", which apparently involved shooting people into deep space for 40 years, and also saw the alien invasion coming, except that everyone on the Probe Mission was deep-frozen and didn't age at all, so we're not sure they've really earned a ticker-tape parade or anything just for being so useless that their main value to NASA was being used as frozen human guinea pigs[2].

Even putting that aside, there's still the little matter of the fucking alien grasshopper/termites that have conquered the Earth. See, the post-Alien Apocalypse humans are all incredible wusses, content to slowly be beaten, killed, and have their fingers chopped off for insect hors d'oeuvres for the rest of time. The only bigger wusses on the face of the Earth are the aliens themselves, who are basically made of wet newspaper and glass. Shortly after he arrives in the local death camp/lumber mill, Bruce shanks one of the aliens with a rusty garden trowel and kills it instantly, kicking off a poorly organized revolution of humans that just begs the question, "why the fuck did we need a man from outer space to come teach us how to use pointy sticks, again?"

Fuck it, we're missing the ultimate meta-question, which is why we're trying to nitpick any level of detail in a movie made to be aired on the Sci-Fi channel on weekend afternoons to hypnotize colossally stoned college students into being too sedated to change the channel, and/or to put bread on the table of terminally unenthusiastic extras. We're just going to go watch that Gak video a few more times and pretend that was the whole movie.

[1] Really, the band of human rebels gets captured by the aliens and they all trip over each other to protect Bruce by claiming to be the leader - which lasts all of five seconds, because the alien is just like "No, I'm pretty sure this guy is the leader, you all seem like drooling retards to me." And he's not wrong.

[2] Actually, that last part answers our other question about how Bruce's character managed to qualify for an astronaut medical post despite being an osteopath, a.k.a. a glorified masseuse/witch doctor.