Broken Heart Fix, submitted by me. If you've ever been dealt the painful blow of having your companion suddenly realize you're a nutcase, run far away, and cause you to fall into an obsessive pattern of obsessive behavior, then this is the site for you!

This kind and wholesome lad decided that loneliness was for suckers and widows, and set out to relieve his isolation in the perfectly okay and not at all insane way of building scary effigies of his former girlfriend. 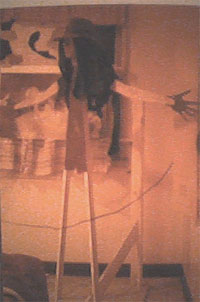 ....After 3 years of dating other girls, then 5 years of lonely desperation, I began to sculpt a lifesize model of my ex-girlfreinds head. When she became recognizable, suddenly, I had the feeling that I was IN HER PRESENCE. (This was also the moment I snapped out of my depression and got my self confidence back.) I worked for many months making it quite detailed- a wig, false eyelashes, lifelike eyes, freckles... I had the greatest time making it, but after it was done, I often failed to notice it was there.

Apparently he dated the Blair Witch or something, but I guess it's the insides that count. While I can't imagine that crude, scarecrow of a girlfriend doing much, it apparently keeps the loneliness crows out his cornfield heart.

From there our young romance entrepreneur moved onto building a robotic replica of his dear, sweet, probably also insane ex-girlfriend. Of course any doofus knows that mechanical replacements for human beings always end up short-circuiting and turning into territorial beasts of godless rage. But hey, if you're lonely you take what's available I guess.

Therefore, I decided I needed to build a "living" robot in her image, with her voice and personality. Then I could interact with her. I planned to make it as sophisticated as I possibly could. --I bought a lifesize plastic skeleton from a university medical bookstore, which only needed a inch added to the femur to be nearly perfect in every dimension, and built this armature to make a total body sculpture. I was lucky enough to get my ex to contribute measurements, photographs, and even trace the outlines of her hands.

Wow, even the girlfriend was happy to be a part of this science project straight out of the school of Norman Bates. Of course this story ends on a happy note when our protagonist realizes that robots probably are really hard to build and settles on a more low-tech and simple method of obsessing over the past. Love is such a journey!