Recent studies have shown that roughly 99% of our nation's schoolchildren are unable to name a single Olympics mascot. And that even includes the recent ones, like Crying Russian Bear from Sochi 2014, or London 2012's "Wenlock and Mandeville," One-Eyed Genderless Blobs designed by SA's own Shmorky! Luckily, some guy named Michael created the Izzy Pins site to rectify this shameful situation by re-educating everyone about the beloved 1996 Atlanta Summer Olympics mascot, Izzy Whatsit. 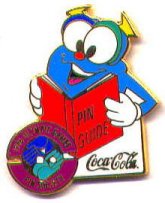 Izzy, you'll no doubt remember, was one of those bland, made-by-committee characters designed to appeal to everyone and thus no one. Well, no one except obsessive pin-collectors like Michael, who has devoted his life to finding every piece of metal emblazoned with Izzy's image:

One year and 700 pins later, I wrote to thank that eBay seller, John D. Gregor, for introducing me to the wonderful world of Izzy pin collecting. John had been the Pin Section Editor of the Official Pin Guide of the 1996 Olympic Games. He enjoyed my letter so much, he sent me this rare and coveted pin of Izzy reading the Pin Guide!

That is "Krusty posing for trading card" levels of meta.

A lot of these pins are so incredibly specific that they could only be worn on one day. And yet, after all those pins, Michael is still not the number one Izzymaniac:

According to Bob Izzi, the premier Izzy collector and expert, I probably have the 4th or 5th most complete collection of Izzy Pins in the world.

Oh, come on, the world's biggest Izzy collector is named "Izzi?" He's obviously a construct of the pin-industrial complex to keep collectors digging for more.

Anyway, Michael only comes in at "4th or 5th" because apparently there were so many of these stupid pins that not even the people involved in their production ever bothered to keep track of all of them. In response, Michael launched "The Izzy Project" to track down these lost cultural artifacts with what appears to be limited success. 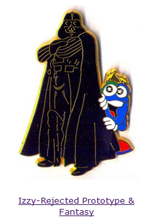 Okay, I realize this was the '90s, and we were just a couple years away from the Beanie Babies craze, but what is it about this kitschy non-character that inspired such a fervent fledging fandom???

Glad I asked. Michael has also taken it upon himself to be the keeper of the Izzy legend. His "History of Izzy" page features a staggering 2,797 words about the inane backstory and lore behind this woebegotten creation:

As with most heroic tales, facts are lost in the retelling. Exactly how Izzy gained the power to leave Torch World is unclear. One legend tells of a wise Elder's revelation that a Whatizit could make it to Olympic Games on Earth, but only for the Centennial Games. The rights of passage had to be earned by finding the five Olympic rings hidden in the center of Torch World, a rugged and dangerous region where no Whatizit had ever tread. Izzy encountered volcano eruptions, mountains, glaciers, waterfalls, swift rapids, big dark caves, fire-breathing dragons, and other dangers, but valiantly emerged from his quest with all five rings.

Is this nonsense even canon??? Who knows? Methinks Michael has gone a bit rogue with some of the story details...

"Izzy Bashing", the first competition of the Atlanta Games, began long before the Olympic Team trials. Competitors were not athletes, but journalists taking advantage of Izzy's cold reception. The battle of words was fought out daily in newspapers and magazines as writers made sport of topping each other with Izzy insults. [...] Reporters were repulsed at the thought of toddlers trading their teddy bears for the horrid blue monster. They said Billy Payne's abominable mascot had disgraced Atlanta, blowing its chance to become the next great International City. History would reflect upon the Centennial Games as the "Bubba Games." The Izzy Bashers were so aggressive, people who liked Whatizit were afraid to admit it.

Ah, yes, those were indeed dark times for Izzy lovers around the globe. Luckily, his plucky underdog status won over the haters, leading to a resurgence in popularity...

This site was last updated in 2008, so I guess maybe not.