Kevin the Witch (Thanks, THE GRAND INTERNET SPACE WIZARD HARLEQUIN!)

"Kev the Witch," also known as Kevin Carlyon, has proclaimed himself to be "POSSIBLY BRITAINS MOST POWERFUL WITCH." Good thing he put the word "possibly" in there, wouldn't want to seem conceited or anything. 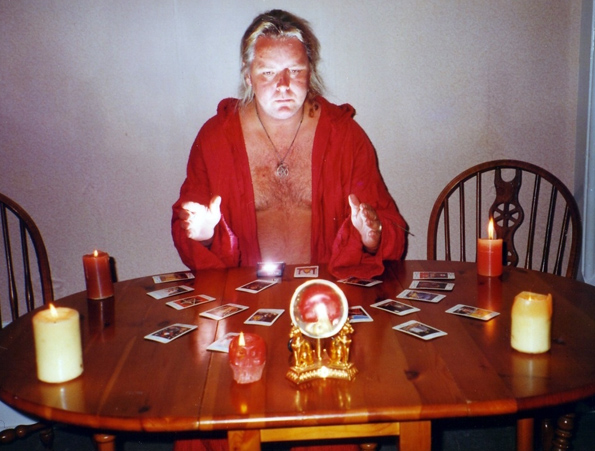 Kevin also bills himself as the UK's most "media friendly" witch, which, unlike everything else on his site, appears to be true. He's staged a lot of dumb PR stunts over the years, like "creating a protective talisman for the Space Shuttle" and summoning the Loch Ness Monster with a rockin' mixtape, and the tabloids just keep covering them. ("Oi, editor, we're a little short this week." "Blimey, just run another piece about that witch nutter and quit bothering me, I'm trying to hack a dead girl's voicemail.") 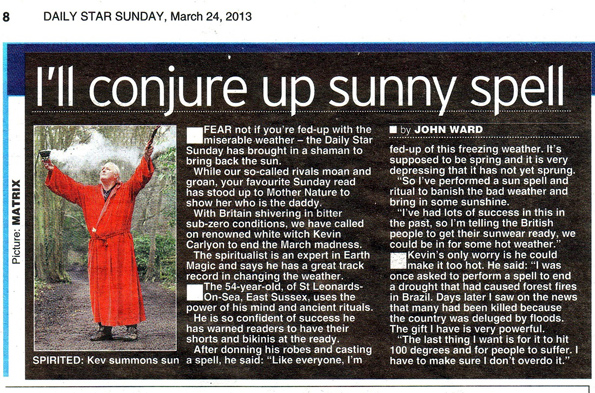 Kevin has preserved pretty much every article ever written about or by him ("I MAKE NO APOLOGIES FOR MY HUMOUROUS ARTICLES. THEY HAVE A SERIOUS MESSAGE BUT ALSO SHOW THAT I AM DOWN TO EARTH!"). However, he's arranged them (and all his other content) into individual pages labeled only with numbers, a navigational scheme clearly forged by Black Magic. He literally expects you to look at every page in order ("THIS IS A VERY LONG WEBSITE SO KEEP CLICKING NEXT UNTIL THE END!"). Instead of providing a link to his long list of conditions you have to meet before he'll agree to help you, he just asks you to "see page 33." You'll get there, eventually! 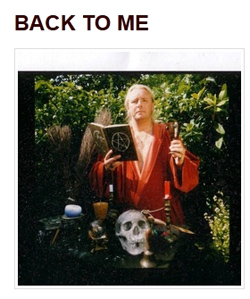 Kevin, whose titles include "White Witch, Paranormal Researcher and Tarot Consultant," says he's the real deal, not like those OTHER GUYS doing the same thing:

Sadly its the same with many who advertise their gifts nowadays, both for Spells and Tarot. They have no special powers or gifts and are conning people like you reading this site and getting your hopes up, taking your money, sometimes thousands of pounds / dollars for nothing. These people really should be persecuted for offering false hope. If you use me you will get results. I keep working on it, no matter how long it takes, to get the result that you desire.

As his wife explains, "Kevin regards his psychic talents as a gift and he doesn't want to exploit people - that's why he only charges £10 for a reading." After all, what's the point of having psychic gifts if you can't make a tenner off it?

People have all kinds of misconceptions about magic-users, and Kevin intends to set the record straight. For example, unlike in the movies, magic isn't instantaneous:

IF YOU ARE NOT PREPARED TO BE PATIENT FOR A SPELL TO WORK THIS IS NOT THE SITE FOR YOU. I DO NOT PRODUCE RABBITS FROM A HAT, WALK ON WATER OR PRODUCE INSTANT OVERNIGHT MIRACLES.

Hardy har har. Pulling a rabbit out of my hat, never heard that one before. I swear, you run around in red robes mumbling words to make the sun come out, just a guy doing his job, and people start thinking you're some kind of crazy charlatan!

Now, you might think a guy who calls himself a witch would use witchcraft. Au contraire:

As opposed to Witchcraft I prefer to practise what I call Earth Magic, It is my own way of tapping into the natural forces of the universe all around us. I believe in the power of positive thought and with ritualistic visualisation I can bring about many different results for people, ranging from love and luck to fertility, health and well being.

Like a maverick cop who doesn't go by the book, Kevin gets results ("I DO NOT GIVE REFUNDS AS I ALWAYS ACHIEVE A RESULT, NO MATTER HOW LONG IT TAKES"). Just like the time he put a curse on the Harry Potter franchise for giving people the wrong idea about broom-riding:

"I have cast a spell on the film company and on the publishers who put a picture of Harry Potter flying a broom the wrong way round on the front of the paperback book. It wishes bad sales and poor audiences on them until the inaccuracy is corrected."

So, uh, how did that curse work out, Kevin?