Virginity Rocks (thanks Lowtax) - Keith Deltano is a self-described "serious comedian" - a title similar to "hilarious cancer" - riding the tidalwave of motivational speaker jobs that has come along with "abstinence only sex education". Those of you familiar with the subject are probably not surprised that it requires a lot of motivational speakers; it's a hard sell. It requires convincing a bunch of overly hormonal teenagers that the best choice they can make is ignoring one of the fundamental biological drives of a human being.

Most adults would scoff at the idea of being told never to have sex by anyone other than an easily-ignored religious figure. Of course, when you become an adult the part of your brain that allows you to empathize with kids quickly atrophies. By the time you're about 25 you view high schoolers as subhuman retardates incapable of rational thought.

Which brings me to Keith Deltano, that "serious comedian" who recently made headlines for threatening to drop a cinderblock on a kid's dick. Keith's act is a thinly-veiled Christian romp that substitutes yelling for humor and physical threats for sex education. 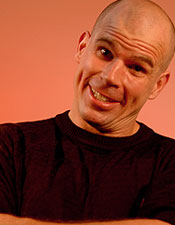 His intimate knowledge of youth culture and years of experience working with families allow him to have a positive impact on the most jaded teen or cynical adult. He combines his knowledge of current societal trends with his professional insight into learning theory, mixes in comedy, and comes up with a formula that has changed lives from Bakersfield California to Frankfurt Germany.

Did I mention that he has a fake alter-ego named Thick Sunny who raps to kids about abstinence? Yeah, he's that bad.

If you think it is suitable for your audience, Keith can bring a friend, Crash, A.K.A. Thick Sunny. Crash approached Keith recently because he was so upset about all the garbage that is out on the airwaves. Crash was just fed up with songs that were demeaning to women and promote violence. He had a song that he said would "shake up" the rap world.

Then there's that whole thing where he will threaten a kid's junk with a cinderblock. I guess it's what Jesus would do.