Kung Fu Par To'A is a Middle Eastern martial art that's likely doomed to be known as Krav Maga's less translated brother (not that Krav Maga's site is much better looking.) I don't want to harp too much on the translation; I took Spanish for like two damn years and I hated having to translate, and that uses the same alphabet. I will say it's pretty hilarious how quickly things can devolve from somewhat intelligible to "are as one of the most Authentic busy."

I can tell you this, though: If the phrase "Iranian Kung Fu" doesn't give it away, this martial art is pretty much bullshit. I kept trying to figure out where it came from and how it was fought, but the history section just talks about how Iranians were awesome at killing people (which they were). I clicked style features, and it gave me the same spiel about personal control and and physical artistry that every overweight white guy who insists you call him sensei talks about. I did come across this cool Flash video of what seems to be the Kung Fu Par To'A method of lightly punching yourself in the chin, but I have yet to find any hard evidence of people actually fighting competitively on the site.

I'm beginning to think this is some sort of ruse.

So, there you have it. We've been lied to. I guess the lesson learned is, should you encounter some jerky Persian guy, challenge him to a Kung Fu Par To'A match. He'll respond in the positive and then immediately run away, terrified that you've found out the secret of his people.* 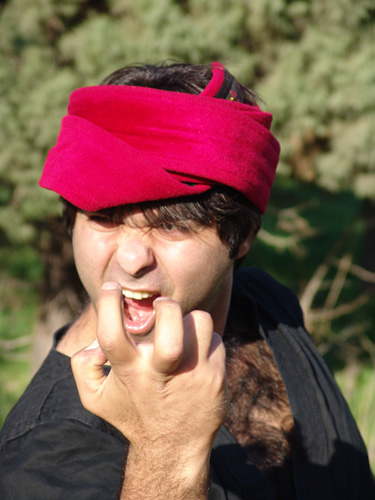