The Orion Mind Project (Thanks, Andrew!)

As the story goes, a few years ago a black dragon-man from Orion appeared in the bedroom of an insane woman ("Eva Draconis") and asked for permission to impregnate her, which she immediately granted. Look, when your biological clock is ticking, and an ET shows up with some space seed, you just have to go with the flow. Anyway, since that fateful first contact, Eva has gone on to meet a Pokéball's worth of space races, ranging from Crocodile Men to Thuban praying mantis dolphins. 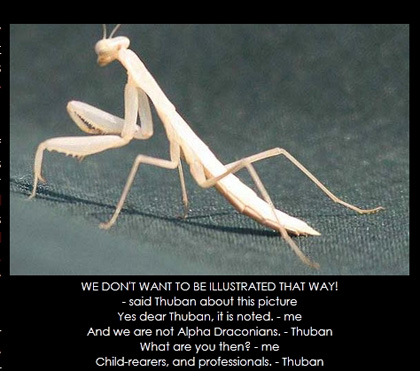 The Orion Mind Project is where Eva meticulously documents her many interactions with these aliens. Many of them are also trying to impregnate her or look at her breasts: self-insert fanfiction at its best! For all the "juicy details," you'll have to spring for the uncensored versions of her self-published books. ("Anyone who has been acquainted with the aliens knows that they are not bashful when it comes to sex or violence...") If you'd rather just freeload, you'll have to settle for tedious telepathic chatlogs:

What would you like to talk to me about? - me

About the great flood, which is coming. - Airship Admiral

Where? Everywhere! All will be desolated! - Airship Admiral

We were born then. - Airship Admiral

Wow, did not see that twist coming!

You can learn a lot by talking with aliens, as exemplified by Eva's conversation with "Strawberry":

We want to tell you about Hitler. - Strawberry

We were the ones who controlled Hitler. - Strawberry

Why did you do that? To what end? ... That was well done, a very impressive accomplishment. Yes, now that I do think about it, he did sound precisely like a Draconian. - me

We have accomplished many other tasks. - Strawberry

We already are! - another reptile, probably my red

"My red" refers to Hamish, a red Dragon Turtle also known as "Sock Turtle Kissy Feet." He's one of the two alien dragons Eva has been allowed to keep as pets for some reason; the other is Malik, her "Big Black Draconian Reptilian from outer space." She teaches them about aspects of Earth culture, such as the true meaning of Christmas, recounted in this bizarre, heartwarming illustrated anecdote. 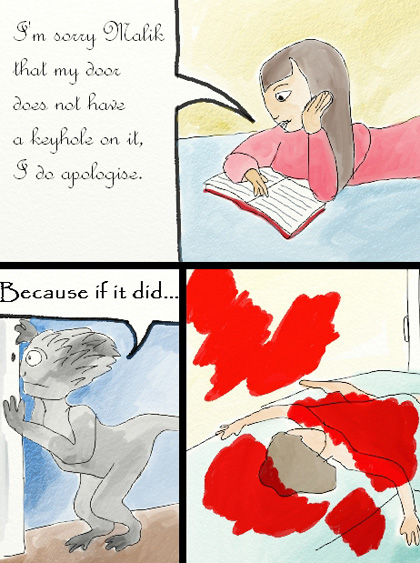 Sometimes, Malik telepathically sends Eva chilling visions of her own bloodied, nude corpse. What a mischievous scamp! This webcomic has "the next Marmaduke" written all over it.