Flashlights: You turn them on and they shine a light. Pretty useful tool, all things considered, but you probably don't give them much thought. That's not the case for the full-blown "Flashaholics" over at Flashlight Forums, where flashlights are highly coveted luxury items. Prepare to be enlightened!

The Flashaholic lifestyle is all about collecting expensive, quality flashlights with cool names like Solarforce Masterpiece, Lumapower Mentor, Wolf Eyes Pilot Whale, and of course the Orb Classic. Behold moderator arewethereyetdad's majestic collection, which he can safely display while his wife's out of town. Jealous much?

One particularly prized status symbol is the Titanium Chameleon, a limited-edition flashlight that was apparently doled out to a select few in a lottery and costs somewhere between $300-500. Some even have more than one:

Man, that means I've owned four different Ti Chameleons. Wow, I only have two left. I feel like a pauper.

Just so we're clear, that guy is humblebragging because he has two (2) flashlights. And why shouldn't he? The Ti Chameleon is so amazing, it even impresses normal people, sometimes, on rare occasions:

I occasionally rotate my Ti Chameleon into EDC. When at work (hospital) most people never look twice at it... but every so often, someone that appreciates unique tools, titanium, or bright lights will go nuts over it. And they are always asking me, "where can I get one?" and never believe me when I tell them the story of these unusual tools.

EDC stands for "Every Day Carrying." These folks even bring multiple flashlights with them on vacation, because darkness doesn't take a holiday. They also carry a lot of other tools around with them so they can be prepared for everything. For example, user wallyrulz seems like handy friend to have:

I can't afford to buy as many as some, but I have a decent knife (Buck Mayo) Multitool (Charge) and Flashlight (Lionheart) with me all the time. People used to make fun of me for carrying multitools all the time (since 1995) but guess who they're always asking for pliers or a screwdriver. Now I get the same flak for flashlights, but once again how often do the same folks say "I need a flashlight, where's Paul" 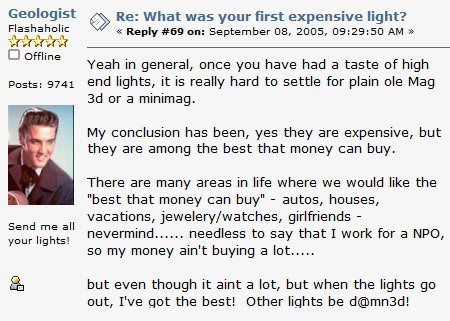