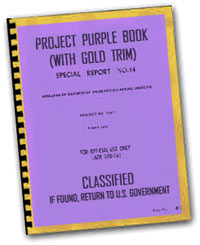 The famous Project Blue Book was a study conducted by the U.S. Air Force in order to determine the nature of so-called UFOs, and whether or not they were a threat to national security. Eventually it was determined that most, if not all UFO sightings had logical, non-alien explanations. While Blue Book was by far the most well-known of the government's "colored book projects", there were others. One of the most notable is Project Purple Book (with Gold Trim).

Purple Book began as an investigation into a mysterious figure known as the Spectral Hustler, so called because he appears seemingly out of nowhere to hustle those he considers to be busters. Spectral Hustler stories are a dime a dozen these days, and even someone you know may have had a Spectral Hustler encounter at one point in their life. In fact, if you've heard of the Hustler at all, you've probably heard the dishrag story. The story goes:

I was walking down to the store when the Spectral Hustler pulled up beside me and started knockin' for no reason. "Sucka, yo' shirt look like a dishrag and I seen them pants on yo' grandma when she workin' in the yard." I stepped back and tried to think of a retort but he snapped, "And where'd you get them shoes, a powerline?" I was like "Damn."

In fact, there are a couple stories in my own family that have been passed down over the years. First is this one from my uncle Tom, back when he made his first (and only) TV appearance.

Back when I was on Jeopardy, it was my turn to choose the next category. I went with "Mystery TV Shows" and was funnily enough met with a video answer. Unfortunately, the Spectral Hustler appeared the screen and his clue was: "This busta wearin' a sweater that look like the Cosby Mysteries, 'cause even Cosby seein' that wonderin' who wear it." I begrudgingly replied, "Who is... me?" The judges determined I was correct and I was like "Damn."

The Hustler obviously knows how to clown on someone in front of a crowd, but he also knows the pleasure of knocking a boy down a few pegs in front of his girl, as my brother more recently found out.

I was at Ross with my lady-friend when the Spectral Hustler stuck his head out of a clothing rack and said, "Damn G, that song 'Ridin' Dirty' ain't supposed to be about yo' girl's thong ridin' up in her b'hind gettin all nasty." We kept walking while he shouted, "I could detect that funk since y'all were back at Big Lots!" We turned and looked back. "Don't say you weren't there, Playa. I see those shoes you got on, lookin' all new even though they from 1998!" I was like "Damn."

All this contact and nobody really understands the nature of the Hustler. That's what the recently declassified Project Purple Book (with Gold Trim) had hoped to find out.

A favorite piece of evidence for some believers is this newspaper clipping of what is possibly the story of the Spectral Hustler's true origin. It's a very hot button issue in most Spectral Hustler circles. 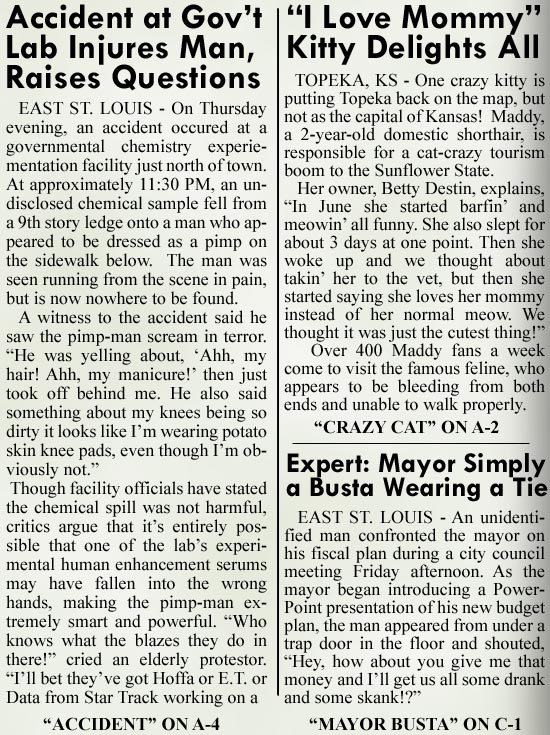 And of course, since Hustler encounters take such an emotional toll, his exact appearance can never be remembered. This is the only illustration by a "witness" known to exist. 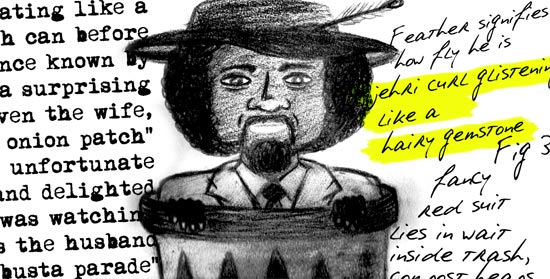 Does he really exist? Is he man? Is he more than man? Why are his victims unable to say anything but "Damn"? Has he no soul?