Daniel Eskridge has created a dinosaur-infested futuristic realm, intended to stretch out over three novels. Despite all the time he's invested in concocting Saurischia and its inhabitants, Eskridge has removed his name from the current incarnation of the Web site, billing himself as "Anonymous Author," as though there were some stigma attached to Internet fantasies involving humanoid cats, dogs and wolves. He's also significantly stripped down his gallery, which once featured the likes of "Abe the Abelisaurus" and "The Angry Hippy." Now the art section has been renamed "Illustration," because it only contains one illustration, and here it is: 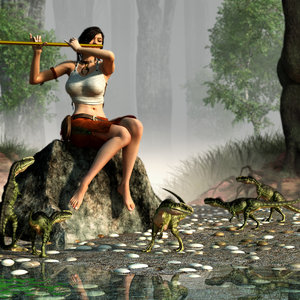 Daniel Eskridge, you're the *real* 'dinosaur charmer.'
Eskridge put together a dumbfoundingly thorough timeline ("5426: Arga Rahoon dies. His son Grudda Rahoon begins a long but unremarkable reign") that leads up to the year 7053, in which the theoretical Saurischia books will be set. There's also a glossary including essential terms ("History song: History preserved in the oral tradition. Generally sung at mealtimes."), but as for the actual writing, he's only completed the first chapter. Here's an excerpt!

Ambrose felt a cool breeze. The smell of the air reminded him of a camping trip he had once taken with his father in the Catskills. It was the smell of forest and nature. When his eyes adjusted to the light, he saw that the doorway was halfway blocked by a pile of dirt and that weeds were hanging over the top of the door frame.


Ambrose was the first to venture out. He looked around and saw nothing but deep forest. The first thing that struck him was the size of the nearest tree. It was the biggest pine tree that he had ever seen. It seemed to be as big around as a large house and was so tall that the top seemed to touch the clouds.


"Oh, it's pretty out here," Ambrose heard Delia say from behind him. He turned and looked back. Both girls had come out of the hatch behind him and were looking around. Thaddeus emerged from behind them. Ambrose immediately saw that Thaddeus looked terrified.


"Th ... This isn't supposed to be here," stuttered Thaddeus.


"When I came in, all this wasn't here. There was buildings and a parking lot."


"What are you saying?" Mara tone verged on hysterical.


"He's saying that we overslept," replied Ambrose, "by a lot."