I don't know if they started with real people sneezing and moved from there, or they'd seen one fox cock too many and decided it was time to rein things back a little. Ether way, this (hopefully) small group of people managed to find each other and get a bustling little forum going, on which they hunt down original clips of cartoon animals sneezing and dispense self-made art for like-minded perverts to jerk off to.

I'm not going to look at any of the art because, frankly, I know I won't be able to un-see it (thanks for leaving that task to me, asshole -- GD), so the best I'm going to do for you guys is search the word forums for gems. Have no fear, though, this shit delivers. Most notable is probably the roleplay forum, where you can find some really amazing descriptions of sneezes, like this gem from user "Mario":

"Heh-HEHH..." Her nose twitched again, her eyes drooped closed, and her nostrils widened ever more, preparing for the sneeze. There was no stopping it now, even if she wanted to. Her nose gave one more twitch, then two, and then let it fly. "HEHH... HEEEHHHH... HEEEH-ESSSHHHHHEEEWWWWWW!"

Let it not be said that these people are simply hedonists, popping boners at every sneeze. No, they have principles and very specific preferences, as evidenced by this post by "Kitsune" in the delightful "sneezing turnoffs thread":

Hm, turnoffs:
- Really loud sneezes.
- Cough-like sneezes.
- Sneezes that are so tiny and rapid it's like "Tch! Tch! Tch! Tchh! Tch!"
- Sneezing on purpose to get me aroused -- I like the *vulnerability* part, so if someone is using it on me, they're not vulnerable, so I'm not aroused.
- Very snotty sneezes. I like a lot of spray, but not a lot of snot.
- Sneezes from rude/mean people. I just can't enjoy the sneeze if it comes from someone who is a jerk.
- Sneezes that all sound exactly the same. Mostly the same is fine, but some variation is important.
Ahem... >>; I'm not picky, no, not a bit. ^^;

So there you have it. Living proof that these people might be sad little deviants sketching images of rabbits with tits having pepper shoved under their noses, but at least they have some fucking standards. Could you say the same? 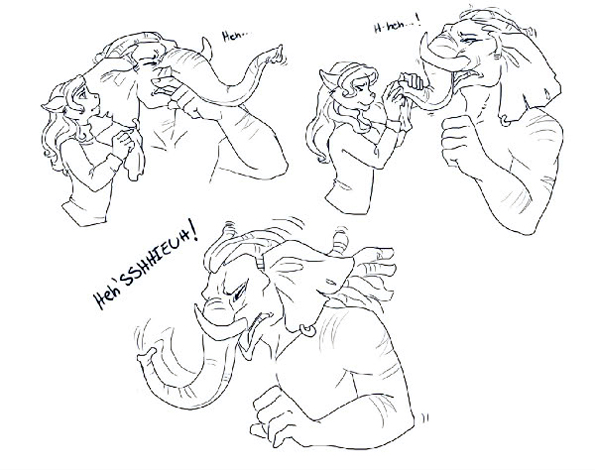