Tulpa (Thanks, TOO SCSI FOR MY CAT!)

Did you ever have an imaginary friend when you were a kid? You probably grew out of that phase, didn't you? Well, here on the internet, you don't need to grow out of phases, you just need to use different terminology. Let Tulpa.info show you how to indulge your schizophrenia and cultivate your own imaginary social network!

A "tulpa" is an invisible friend that you have to spend a hundred hours thinking really hard about, The Secret-style, until they become sentient. Here, let one of Tulpia.info's myriad of FAQs explain:

A tulpa (the Tibetan word for construct or build) is a self imposed hallucination that interacts with all 5 senses. This practice was first done by Tibetan Buddhists in ancient times. You will be able to see, hear, smell and touch (without solidity of course, but this will be explained later) your tulpa just like you would a normal person. A tulpa is a forced hallucination, a schism of your own consciousness, a fully sentient being, and a companion.

And, just like the Tibetan Buddhists of old, modern tulpamancers use their incredible mental powers to create My Little Pony characters. Gee, wouldn't it be great to conjure up your very own hallucinatory Twinkie Pie to follow you around, instead of just getting a cat? Here's a video demonstration:

Interested in learning more about the wonderful world of tulpae? Peruse Tulpa.info's article blog, where tulpa researchers discuss important issues like creating "wonderlands," mental environments where "hosts" and their tulpas can interact. It's like Second Life inside your own head! If you get lost amidst all the pseudo-academic jargon, consult the glossary, where you'll surely learn some fun new terms.

In the Tulpa Forums, you can interact with the rest of the tulpa community, add your tulpa to the registry, contribute research, help others create tulpas, schedule playdates with others' tulpae, and just hang out. In the "draw our tulpas" thread, you can share your tulpas and get a look at everybody else's (pony, pony, pony, anime girl, wolf dragon guy, pony, Slenderman, pony, Russian kid "keeping the bourgeois devils at bay", catgirl, something called "Mr. Marbles," pony). 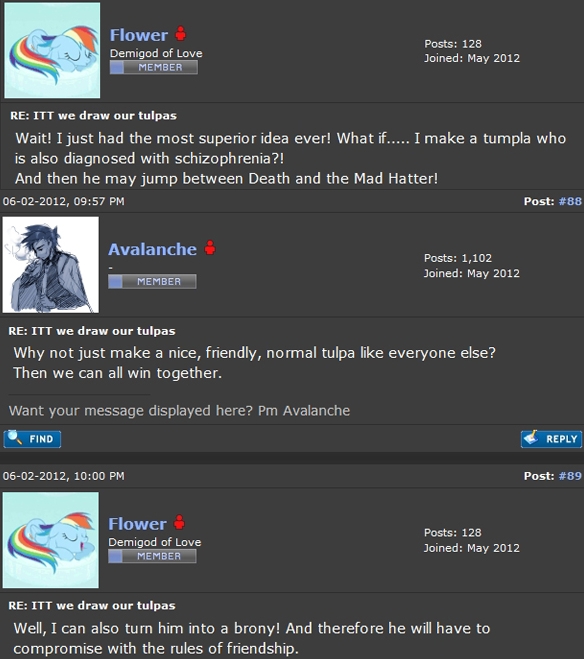 Of course, it's not all fun and games. There are some serious issues that could result from your tulpa. For one, "Tulpaforcing" (creating) a pre-existing character - like, say, a certain pony from the pony show - is ill-advised, because it might cause your tulpa to have identity issues and get depressed. My advice is to go ahead anyway .... Hasbro's lawyers can't exactly send a cease & desist to your mindscape, now can they? Check and mate.

Also, no matter how many times you explain the tulpa concept to them, parents just don't understand:

Needless to say, it didn't go over well. I had to slowly convince her that we couldn't switch like that (Never mentioning that we might be able to in the future) and had to get her to realize my tulpa is a good thing and not some possessive demon. After the psychiatrist, I showed her tulpa.info and her first question was: "There's hallucinations! Didn't that concern you?"

"Surprise, Mom, my tulpa and I have switched control of my body. I am now Ironhoof, strong warrior pony and protector of the Wonderland Fields. Got any oats?"

Finally, tulpas might try to pressure their creators into doing things they don't want to do. Derp Star learned this the hard way:

I have recently finished imposing my first tulpa, an earth pony. She has started a behavior that I know not the roots of: a demand for sex. Every time before we go to bed, she begs me to "just give it a try." I don't want this relationship with her- I have always been against the idea of imaginary sex. I didn't even give her an anus or vagina!

Naturally, the tulpa community was quick to help Derp Star with his little problem, advising him to sit down and have a serious talk with his tulpa, reminding him that it's all in his head, and -

UPDATE: Well, I decided to just go ahead and fuck her.

Oh, okay. That works too.