According to many critics, modern television shows -- at their best -- are better than television shows have ever been. Yet most people spend significant stretches of their days removed from this quality programming. True, they can stream episodes on their work computers, and they can spend their commutes watching small-screen dramas unfold on their stupid little phone screens, but what about when they're exercising (?), or camping, or fading into unconsciousness while wishing the TV droning in the backdrop was IN THEIR FACES instead of across the room? The TV Hat makes all these dreams come true, with the added benefit of making you look as fashion-forward as a desert-dwelling Bedouin playing a tricked-out, strapped-on Virtual Boy. (It comes in red, white, blue, khaki and camo!)

The site suggests male TV Hat users are extremely muscular, making them look like members of a new super-race consisting of ultra-strong soldiers with electronic-component heads. TV Hat also comes with a "neck protector," which offers the level of support chiropractors recommend for people with a fucking TV strapped to their heads. As is so often the case with technology, early adapters run the risk of looking ridiculous, but such is the cost of progress! 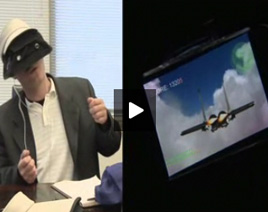 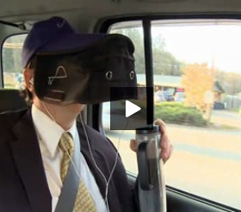