Unidentified Human Remains (thanks Mapocho) - Here's a first for the Awful Link of the Day: we're doing a public service! Today's Awful Link is an AOL site belonging to someone at the Michigan State Police. It's ugly, it's creepy, it's sculptures of unidentified human remains! Some of them are even available in animated GIF form.

The Michigan police find some skeleton or mummy out in the woods and the mummy doesn't have a wallet. When dental records fail to produce a result in the system, they sometimes construct one of these busts using skeletal features to extrapolate what the person might have looked like when they were alive. The results are uniformly creepy, leading me to believe that all of the people on the site might have been killed because they were terrifying monsters. 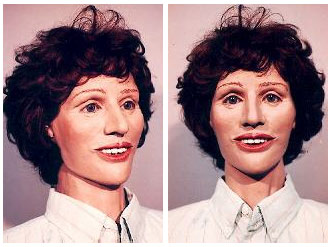 In August 1994, police were led to the remains of an adult female in an abandoned farmhouse in Cottrellville Township in St. Clair County, MI. The remains had probably been at the site for 1 to 3 years. The woman had been shot at least twice, once to the head.

Beware, this site may give you nightmares. On the other hand, I feel like I've done my good deed for the day because maybe someone can recognize their horrifying spinning grandma or something.