The Assassination of Barack Obama

Yazmany Arboleda performed a valuable service by claiming the domain name The Assassination of Barack Obama, thus preventing it from falling into the hands of incompetent top-hatted Neo-Nazis. Unfortunately, instead of filling the site with placeholder ads, Arboleda uses it to house his "provocative" artwork, which consists of zany gimmicks like a two-room-long Obama schlong. Anyone who has ever seen a modern art exhibit will recognize Arboleda's shock-value tactics: The fake racism, the lame pop/corporate-culture references (a picture of Obama's children bears the Imus-scandal caption "nappy headed hos," Gap and Budweiser logos appear for some retarded ironic reason), the no-shit Big Statement (media coverage is like assassination -- of someone's character!). Of course, Internet commenters haven't gone to any galleries, or familiarized themselves with Arboleda's dated touchstones and labyrinthine artist's statement, or done anything lately other than express frothing rage regarding topics about which they know almost nothing and don't care to learn more. So instead of complaining that Arboleda's work is glaringly obvious and mundanely executed, they're furious because "Oh My God, this guy with a foreign name wants to kill the nice man from the infomercial!" This whole saga illustrates Something Awful's slogan in action, demonstrating how the Internet can make something stupid even stupider. 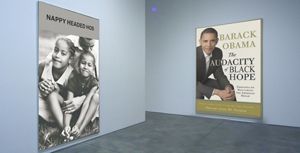 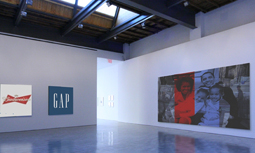