We leave you this week with the best video I've ever seen in my entire life. Okay, so at first glance the video its self might not seem that special: a washed-up TV star plugs his new straight to video movie with his son. However, he also mentions something else; something amazing. Something that has the possibility to revolutionize internet trolling as we know it. 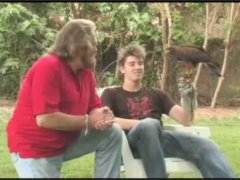 That's not a katana, Naruto420, that's a Wakizashi. And if my mountain man eyes don't decieve me, a poorly crafted one.Dan Haggerty's career died sometime before I was born. Better known as TV's Grizzly Adams, Dan has spent the better part of 30 years playing everyone's favorite mountain man. However, a notorious drug bust ended his mainstream career nearly as soon as it had taken off. Dan, it seemed, was destined to live out his days as a throwaway gag on Family Guy. Well, no longer!

You see, Dan also does a video message service. What does this mean? Well, for the low price of 200 dollars, Dan will make a video of himself saying anything you want, to whomever you want. I realize that on the surface, this sounds mundane. But just think for a minute: what if you paid Dan to troll Youtube?

[An eagle soars through the clear, blue sky and lands on Grizzly Adams shoulder. Adams is busy nursing a bear cub back to health after it was caught in a hunter's trap]

[He pauses from his task and look up, addressing the camera]

"Sephiroth2859, I just don't much care for your opinion on Anime." 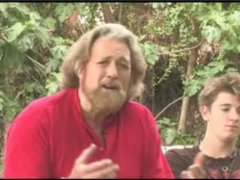 Furthermore, your taste in j-pop leaves a lot to be desired.

[He resumes helping the cub]

Seriously, this is a ground breaking discovery. No longer will trolling be done with cheap webcams in dimly lit basements, but by has-been 70's TV stars the way God intended. In fact, I think more 70's icons should join in. Just think of it: Officer Ponch from CHiPs writing someone a ticket for posting about how much the PS3 sucks; George Jefferson calling a group of Juggalos "honky"; Fonzie telling your vlog rival to "Sit on it".

The future is now.

" It would be worth a couple bucks to﻿ have Dan do a promo for the many ways to cook a Grizzly bear."
-TwoSevenDeuce

Thanks for tuning in to this edition of AwfulVision™. If it's on Youtube and no one cares about it, you'll find it here! Thanks to my pals Lowtax, Abraham, Soapy Shoes, the rest of my BYOBuddies and those of you who sent in suggestions via email. Keep them coming!

I would also like to invite you all to join the official AwfulVision™ Youtube group, where you can (eventually) find all of the videos featured on AwfulVision™. Check us out here and feel free to subscribe!

Speaking of links, if you'd like to submit a video to AwfulVision™, just click this link. DO IT! HELL YEAH I CAN BENCH PRESS A HORSE!