There are many questions in life that have puzzled scholars for generations; some, we may never truly know the answers to. Questions like "Does God exist?", "Why is it that sometimes a really fat slob will have a really hot girlfriend while I'm stuck at home with my fleshlight for the 7th Friday in a row?", and perhaps the question of all questions: "Why do skinny, nerdy white guys feel the need to ruin hip-hop?"

Here we have a parody of Jay-Z's great song "Girls, Girls, Girls" from his album The Blueprint. The re envisioned version, also titled "Girls, Girls, Girls" is about the history of feminism and may as well be from rapper/producer/visionary "scottpenkava"'s album "The Blueballs" because if you're this huge of a pussy, you are never going to get laid ever. 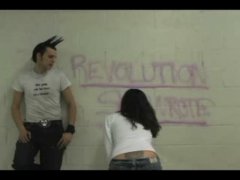 Tramp stamps were an integral part of the Sufferage Movement.You know, I really can't hate this song. It's unfunny, sure. It's also horribly written and delivered with such a mush-mouthed delivery that it makes Rodney Dangerfield's "Rappin' Rodney" album look like Nas' Illmatic. But I still can't hate it. I guess I really just appreciate the amount of effort "scottpenkava" put into being such an utter failure. The video features lavish, "on location" shots including such exotic locals as "the warehouse my dad owns", "the roof of the warehouse my dad owns", and "my dad's house which, if you're keeping track, also owns the warehouse and it's roof". Also, I'm pretty sure there is a cameo by Mr. Spock, who at one point helps him open a door.

The video, much like Hov's non-pussy video, features illustrations from the song. "scottpenkava" raps while the various "girls he does adore" do all sorts of wacky, militant feminist things like beating him at arm wrestling, beating him at Monopoly, beating him at chess, and beating him at poker. Of course, beating him at games isn't the only facet of feminism; according to this video, feminism is also about writing "REVOLUTION she wrote" on a wall with purple spray paint, not letting him eat things, and also nail gunning his hand to a piece of wood.

Susan B. Anthony would be proud.

"That was brilliant. Easiest explanation of feminist theory I've ever seen.
p.s. I loved when you hosted SNL "
-rkfifmxpxchic

" why thank you, tell a friend.
p.s. i fuckin' love hot topic, even though it's not punk rock."
-scottpenkava