Welcome to the second installment of AwfulVision™, where we once again bring you more videos so unpopular that they obviously must be great! Unlike our last column, a hodgepodge of various horrible videos, this week we're shoveling out movies so fucking awesome that they will surely become terrible internet memes within the next six months or your money back!

So remember, when all your friends start wearing "Not Today Motherfucker!" t-shirts or "Teh" trucker hats, you saw it here on AwfulVision™ first, which means you are way more indie than those stupid sheeple you call "friends". Let's begin!

There are two kinds of videos you'll see here on AwfulVision™: the truly terrible kind we tend to feature that have no redeeming qualities whatsoever, and every once in a while, the bad but undeniably awesome videos like this one that are sure to, or are already beginning to take the internet by storm. Remember: even hilarious video memes like "I'm the Juggernaut, Bitch" had to start somewhere! 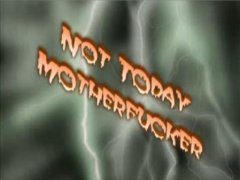 Yes, I said it: This video is awesome. In fact, I am literally at a loss of words to describe the sheer levels of greatness this video aspires to. Had this video existed during the dawn of man, I haven't a doubt in my mind that Prometheus, having been given the choice to steal fire or this video and give deliver their secrets to mankind, would have said "Who the fuck cares about fire?" and promptly burnt this to DVD-R before heading down from Olympus.

We open with a title screen that "bizzbatch", a true modern day Spielberg, obviously spent well over 3 minutes lovingly hand-crafting. The title of this video, nay this epic, nay this masterpiece is displayed in only the finest freeware "drippy" font he could find and jauntily rotated randomly to one side showcasing his obvious mastery of both MSPaint and Microsoft Movie Maker. It's almost as if he made the title so purposefully bad that the actual content would rock our world so much that society would crumble and he'd arise as the Nerd-King of Earth. 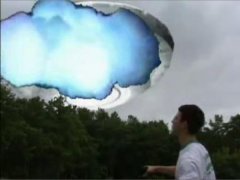 FUCK YEAH.A.D. 2007. July 6th. 5pm. Earth is under invasion by holographic UFOs hellbent on shining a green spotlight on our shrubs and only one man stands between us and certain doom. "NOT TODAY, MOTHERFUCKER!" he screams in defiance as he raises his toy gun and fires off but a single round. Luckily, his aim is true and his film budget is short: The UFO explodes in a heavily pixilated blue fireball .avi he found on a 5 dollar "Over 1000 Movie Maker Effects!" CDROM at his local discount store.

Heroes come in all shapes and sizes. Some risk their lives to protect others, some simply work to make society a better place for all to live in, and once in a great while,one comes along that isn't afraid to fire an Airsoft gun at a UFO model they made in 3d Studio MAX and then pump their fist in victory. God bless you, "bizzbatch". Thanks to your tireless UFO fighting, the earth will sleep safely tonight.

"God damn people are open to nut themselves over this. wtf?"
-Mosseman

"How does a handgun completely obliterate a super advanced spaceship from an unknown alien race... it must be like the death star.."
-OmgBuddhaDotExe