Revenge of the Nerds!

Apparently, not having a girlfriend leaves you all sorts of free time to devote to the betterment of mankind. Not that I would know anything about that, because I am a staunch asexual and proud sufferer of Aspergers Syndrome, but I'm pretty sure that if a few of you breeders out there stopped chasing girls, we'd have a cure for cancer in a fortnight. For example, if Albert Einstein (another proud Aspergarian) had stayed with his wife, we might have been left without one of the most important achievements of the 20th century: 1994's romantic-comedy "I.Q." starring Meg Ryan and Walter Mathau. 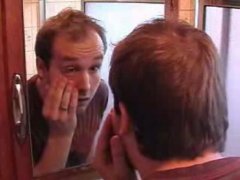 Voted "Most Likely To Make A Something Awful Writer Feel Better About His Life" 1987.Far more importantly than anything that hack Einstein ever did, however, is the way jackthevideoguy channels his repressed rage at his female-imposed celibacy - rather than solving the mysteries of the universe, jackthevideoguy has devoted himself to making wacky-ass YouTube videos. I think I speak for everyone who give a fuck when I say that QBASIC Nerd is his crowning achievement; and since "everyone who gives a fuck" is basically "me but only because I'm getting paid", I'm afraid you'll have to trust me when I say that this video is perhaps the most awesome shit I've ever seen in my entire life.

Warning: Ask yourself the following before watching, because this video is possibly so amazing that your head may literally fucking explode.

If you answered no to most of these questions, then please click the play button and prepare to have your life injected with some Vitamin ROCK. Don't trust me? Take it from fellow YouTuber "WeirdAlGamer":

"its qbasic an program to write program in and stuff if so wher can i get it and is it any beter program to writ programs in? and how dose it work?"
-WeirdAlGamer