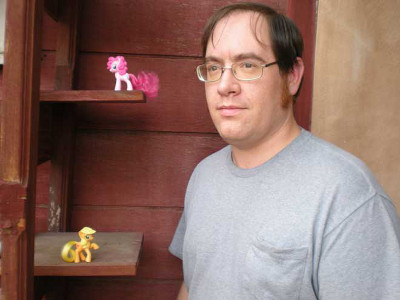 Oh, yeah, this article is actually supposed to be about dumb videos and shit. I should probably post some before my superiors shitcan my unfunny ass for writing a small novel dedicated to dudes who fap to horses. Needless to say, these videos will be brony-related because I give no fucks even when I'm actively giving a fuck.

Brandon G. exposes the appeal of MLP to sperg lords: the ponies apparently have a tiny autist inside each and every one of them. I don't mean that in some kind of metaphorical way. They are literally robotic exoskeletons for the Autistic Horde.

Of course, what would any Brony article be without a new video from everyone's favorite McDonalds autistic. Pro-click as fuck. DAT DRAWING.

16 minutes of sweet, delicious butthurt over their favorite retard horse getting reworked as slightly less offensively retarded proves that the only good thing about bronies existing is the fact that they are able to be trolled (often by the show itself).

Howard Stern, a man who has had senior citizens ride Sybians to orgasm on his show, is horrified by bronies. Let that sink in.

Fox News, on the other hand, casts bronies in a positive light proving once again that even a broken clock is right more often than Fox News.

Watch it until the end. You'll shit bricks.

Remember that "wretched hive of scum and villainy" from the glossary? I wasn't kidding.