I'm going to give y'all an early update on the Hat Eating Fiasco, to make sure that I'm following through in an appropriate matter.

Ever since Danny Manic posted the challenge, I researched high and low into what kind of hat I would have to eat. A long time ago, about 2002, I actually had a good magic nerd friend of mine who lost a bet and claimed he'd eat his hat, and followed through on the bet:

Granted, Eric actually owned that hat prior to the bet so he had to eat it for everyone, but he only made it for about three bites worth and couldn't shit right for a month. Once I saw the Flask Fucker, I knew I was in trouble - especially because my head is gigantic & the only "hat" I own was a Polystyrene & impact plastic bike helmet.

After a day's worth of research, here were some of my findings:

-It turns out that there is no such thing as a Nacho Hat. I could have sworn that some enterprising Mexican restaurant would have created such a device, but it was not to be.

-A Porkpie Hat isn't what you think it is.

-Banana Basket hats aren't exactly "hats" - they are in fact wooden baskets that people wear on their heads, to carry Bananas. This was incredibly disappointing.

-I asked my family doctor, as well as three buddies in various states of Medical School: It's basically much healthier to eat your own leather shoe (ala Werner Herzog) then it would be to consume any sort of Straw Hat (destroys your colon) or Hemp Beanie (impossible to digest). Baseball caps, as well as any sort of manufactured textile would be poisonous if I boiled them down, flash fried them, or stewed them for an extended period of time.

However, there was one option that wouldn't necessarily kill me: 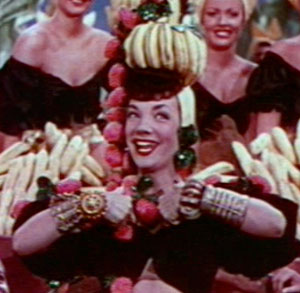 That's right: The Tutti-Fruity hat. Iconic for her entire career, Miranda wowed America with her sensational Latin choreography, vibrant singing, and absurd hat made out of fruit. 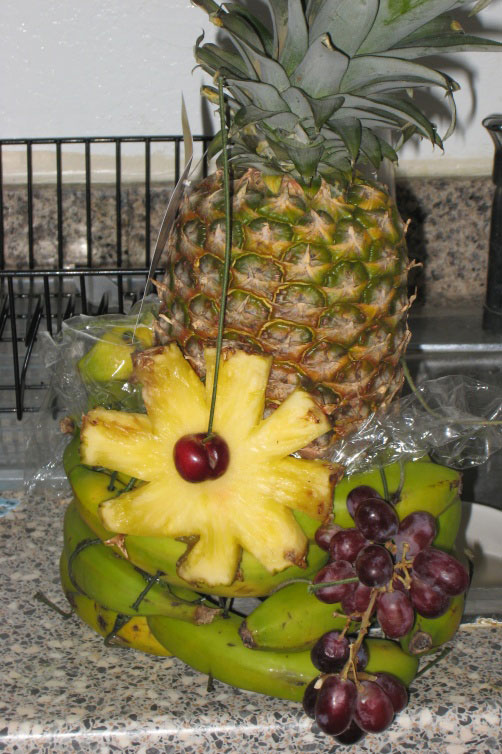 Nothing but Bananas, Grapes, Clementines, Pineapple, Cherries, Sugar Glue as well as Toothpicks & Crafting Wire (which I will not be eating btw)

"But Abraham," you might be yelling, "you are pussying out! A Tutti Fruity hat is not a real hat." To debate that, I turn to the Wikipedia definition of Hat:

A hat is a head covering. It may be worn for protection against the elements, for religious reasons, for safety, or as a fashion accessory. 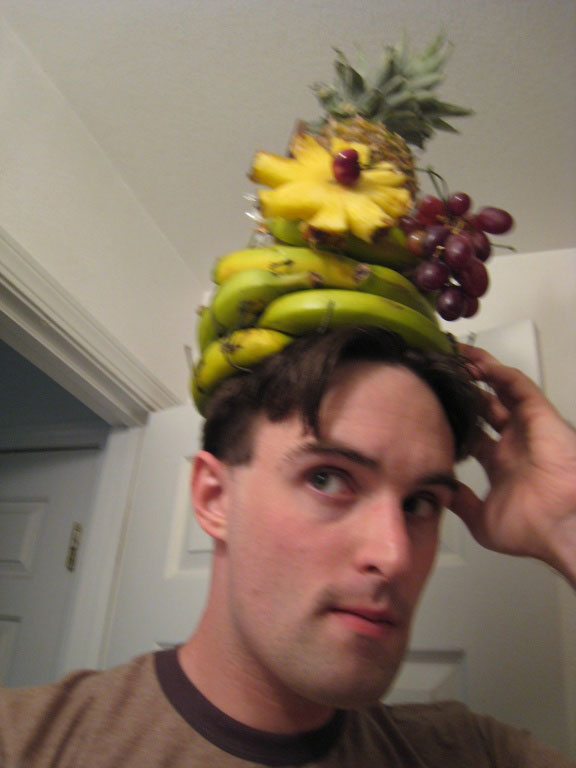 So don't get me wrong, I know some of you are seeing this 10 pounds of fruit as a cop out, and not the latest style that just so happens to make me over seven feet tall. However, I am aware that I will have to prove to you that this gigantic pile of sculpted carbohydrates are in fact, a hat.

Therefore, I plan to wear the self-made Tutti Fruit hat out tomorrow for a Memorial Day Fashion Photo Shoot, consisting of:

Once the full day of activities are finished, I will then proceed to eat the entire Tutti Frutti hat (although this might take me some time), and die from Banana Poisoning.

I also put a lot of effort into not using any sort of fabric to balance the hat, or make it fit properly, because I knew I wouldn't be able to eat that fabric either. If I stir fried or deep fried a hat, I wouldn't be able to eat the entire thing. This is the best compromise I could come up with, and you get to see a dumb idiot wear 10 lbs of fruit in public in lieu of a 10 gallon hat. Sorry dudes!

I'll make sure that you guys get a full grasp of how bad it is to wear that much fruit as a head covering. Only reason I volunteered this was to prove that it was an actual hat, and that I think I should try to put as much effort into making this entertaining as Twigand Berries did.

I'm going to eat the hat. It might take awhile, but I'm going to eat the entire thing (sans binders and fruit containers) by myself, and I'll put away as much as possible in the first sitting, then freeze and eat the rest later (and I won't eat anything else until the hat is finished).

If someone wants to eat a hat, go ahead and eat a hat (don't actually eat a hat), but I am not saying I am going to do anything if that happens.

Now if you will all excuse me, I have to reconstruct the fruit hat so it's fresh for today.