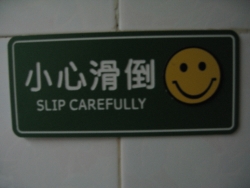 I like milk. A lot. So I was very, very close to blurting out to my host-aunt:

"Gee, I really like the size of your jugs!"

This other one was mostly on purpose, fucking with people who couldn't tell how much English I knew. I played a lot of pool at the college I went to, often just by myself between classes. People would come up and ask "Playing anyone?", to which I would reply with a perfect pokerface: "No, I'm just playing with myself."

I spent quite some time in France when I was 17. Always the optimist, I asked a girl if it was OK to kiss her on her lips - it was our first date.

The dictionary told me, "baiser": means "to kiss".

Oh the humiliation...I did not succeed that time.

This brother and sister I knew grew up in Mexico and were eating at a restaurant in the States. Well, the brother kept on bothering the sister, so she finally yelled, "Stop molesting me!" The restaurant went dead silent and everybody stared.

I was a foreign exchange student in Austria my sophomore year of high school. In the first couple of weeks there, I met a ton of people who of course asked me questions to get to know me. They spoke to me in English because I didn't know German yet, and nearly every one asked me "Do you have a friend?" I thought it was a rather odd question and would of course say that I did indeed have a friend, actually a lot more than one. The questioner would look surprised and ask me what their names were and I'd rattle off my best friends' names as they stood there looking stunned...

As time went on, I noticed that people seemed to either be friends with someone or be married to them, but not be dating anyone, and that some of these "friends" were very, very close... After two or three weeks I finally figured out that they had been trying to ask if I had a boyfriend because the German word for both regular friend and boyfriend is "Freund". So there were about 20 people wandering around who thought I was a 15 year old bisexual sex addict pretty much.