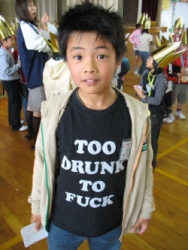 I heard this one from a friend of mine. A few years ago she was out to dinner with her boyfriend and a bunch of his Japanese friends. Before the dinner, they all gave a toast and shouted "Kanpai!" like they do. She thought it was cool they used another language, so she wondered if she knew cheers in any other languages. Why yes, she knew it in Spanish! So she raised her glass and shouted "Chin chin!"

What she didn't know is that chin is a Japanese slang term for penis. For the rest of their visit, she was known as the penis girl.

At the beginning of my 3rd quarter of Spanish, we were reviewing reflexive verbs like lavarte (to wash something or someone, essentially). One student really wasn't getting when you add the 'te' ending and started listing off verbs asking if it was appropriate with each. He finally asked about correr (to run).

I was at a camp for linguistics kids in Kazakhstan a few summers ago for uni. Basically it was them teaching us dumb Americans things about their culture and us teaching them our language. All in all a great deal.

After every single one of these meetings, the natives would be absolutely in shock, walking around with deer-in-the-headlight looks and dropping whatever work they were doing to make sure everything was ok and stopping in to check on the youngsters. They were terrified that something woefully terrible was about to happen, and we couldn't figure out what the fuck was going on. Turns out, "problem" in the native tongue translates into "oh Jesus help us something monstrously terrible is happening we have a HUGE showstopping problem." So when we said we had a problem with the canoes, they assumed kids were drowning. And when we said we had a problem with payroll for two days, they assumed the office had burned down and they were never going to see a red cent.

Took us three weeks to figure this out. Strangest but best lesson in linguistics ever.

Last semester I wrote something really amusing on a test. "Anata no sobo o tabete shimaimashita." The shimau verb form implies regret, that you did something you should not have done. I was supposed to say "I ate your soba" but I said sobo instead, which is an impolite way of referring to someone's grandmother. So I essentially said, "Sorry, but I ate your granny."