Populated largely by medical students and professionals, The Goon Doctor dispenses sound advice to SA's forum users. It doesn't usually show up on the Comedy Goldmine radar, because people aren't really looking for hilarious responses when they post something like "I have a brain tumor" or "my fiance broke his femur." However, Reset_Smith demonstrated the subforum's lighter side by running a number of whimsical tests. Like seemingly all scientific experiments the Forum Goons conduct, this one involved the experimenter's own penis.

My penis seems to have a mood indicator. I'm referring to something other than: Hard = Happy.

I'm 23, and for as long as I can remember, there has been this little black dot on my penis. It's on the underside, just below the ridge of the head. A tiny, raised, black spot. I know it isn't STD-related, because I remember noticing it when I was a little boy, back when my penis was made of magic.

I've been picking up on a strange trend, though. Whether going to the bathroom, or just flopping it around for no reason, I've noticed that the dot will change colors from time to time. Looking back on the past instances where I've seen a different color, it seems that the dot was bright red when I was upset. For example: I had a bad day at work today, I came home, and it was red. Then I mellowed out and played guitar for an hour, and now it's black again.

I'm getting ready to conduct a series of experiments to determine the full range of my penis' intuition. Likely, I'll be getting myself into different emotional situations, followed by thorough dong-examination.

If my penis can physically manifest certain emotions, maybe it could be used for self diagnosis? To tell the future? We'll see...

Or, one of you could help me find out what this really is, and save some time

It's probably a Campbell de Morgan spot. I've got one or two on my body, so does my Dad and my brother. Blood flow to your dick is minimal most of the time so the spot would be pretty dark, unlike if you had it on your chest skin, where blood flow is consistent and it would be red all the time.

So unless you get worked up or have an erection it's not going to have enough blood in it to look red.

Thank you, Dick Trauma. I'm glad that someone with that username could make sense of this. But I'm still convinced that it's magic.

On my way home from work, I stopped at the gas station to conduct an experiment. At the front counter, the scratch ticket display was organized in a 3x3 fashion, with tickets increasing in value as they ascend the grid.

I went to the bathroom to consult my penis.

The plan was to purchase tickets associated with the position and color of the dot. For example, should my junk be shifted to the left, with the black spot, I'd purchase the lower left ticket. But if the spot is red, I'd purchase the ticket in the opposite corner.

My penis was hanging slightly to the right, and the spot was dark, like rich Colombian coffee.

I zipped up, went to the counter, and purchased the ticket in the lower right corner.

Then, to establish a control group, I purchased the ticket in the center of the grid, and, just for the hell of it, I bought the ticket on the left, as well.

Here they are. Labeled accordingly. 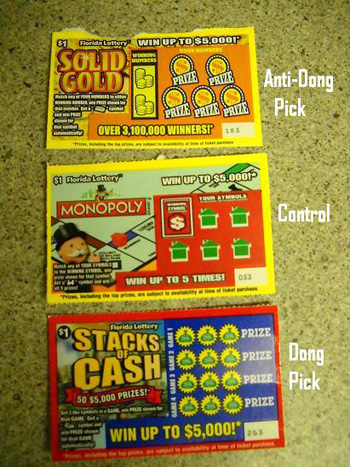 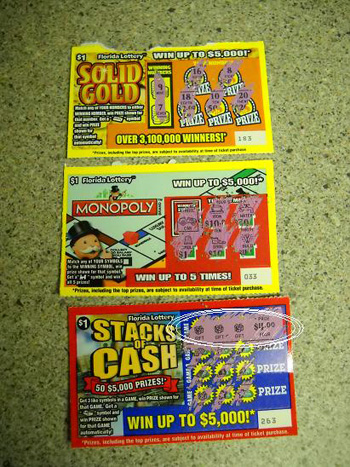 Could it be?
Did I just profit a dollar?
Holy shit.

Perhaps I should return to the gas station and up the stakes.

Impressive, but I'd be more impressed if you scratched off those tickets with your pecker.