Hello hello yes hi folks I can see most of you from here.

Great to be here, I uh flew in from Canada this morning and boy, are my legs well rested.

A lot of my friends ask me, "hey, social vegan... do you remember what you were doing when 9/11 happened?"

Of course I do I was sitting down

a quick show of hands, how many of ya'll went to senior prom hahaha nice, wasn't it the worst? I wouldn't know I stayed home and sat the

the comedian walks out on stage smiling. his smile turns to rage when he sees the water bottle already occupying his stool. his stool. audience looks on in horror as a grown man pummels a bottle of aquafina

The comedian, enormous, sits in the town square. The children wreath him in ribbons and garlands. He's so happy to be here tonight. What a great town.

Later, he will say the catchphrase, you know the one, the one you like, and the town will be happy. At least for that night.

he stands, the audience quiets to a few chuckles and quiet murmuring. slowly he creeps across the stage towards a smaller chair, then sits down. the audience erupts into uproarious laughter and guffaws, huge applause as the curtain closes.

Tickets are taken, people purchase their beverages and snacks, and make their way into the comedy club. As the time for the show approaches, slowly people make their way onto the stage. More and more people become increasingly packed together, the house, completely empty. The lights begin to dim and over the loudspeaker they introduce the comics for the evening. The crowd erupts in applause from the stage as the comics make their way from the back into the house, sitting at open tables. 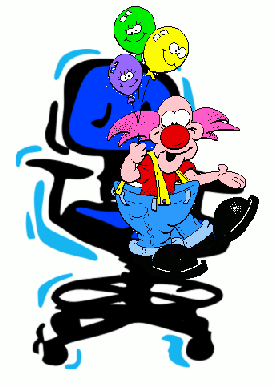 Really getting sick of seeing all these able bodied comics doing sit down routines and taking away jobs from wheel chair comics.

When I take my kids to see folding chairs I expect a certain level of professionalism and respect, I'm not sure what kind of avant-garde cutting edge comedy this professional wrestling match is supposed to portray but it's in incredibly bad taste.

"so i sit down on the subway," the comic begins. "and this guy, comes, he comes and he sits down beside me." he makes a wide-eyed gesture. we all know this situation. "so now we're on this subway, sitting. him and me, we're sitting next to each other." it's something that's always gone unspoken but he's finally putting words to it. "and then, get this--we get to a stop, and he gets up. but i'm still sitting there like," he motions exasperatedly at an imaginary chair next to his. the camera cuts to shots of the audience standing and eating dinner from their hands. they laugh and stamp their feet, because it's rude to applaud when your hands are full.

"In America, comedian sits on chair," begins Yakov Smirnoff, world-famous sit down comedian, from his bar stool on stage. The crowd tenses with anticipation. They have an inkling of what might be coming next, but they cannot quite bring themselves to hope for something so brilliant, so audacious.

carrot top stares into his tickle trunk at a tiny stool with the cue card taped to it reading "stool sample" he pauses, is it even worth it anymore

Clint Eastwood brings a president on stage for a bit he has planned for his politics speech.
"So you all might have noticed the chair this president is sitting on, and I ju-"
*silence*
"No chair, you'll have to wait your turn for me to sit on you, Obama is not done sitting yet"

"But doctor," says the clown. "I am Pagliacci!"

"You still need to get out of my chair," says the doctor.