Calling 911 can be stressful. If you're a millenial, it combines your two biggest fears of asking for help from authority figures and talking on the phone. And if you're not a millenial, you're probably calling because you broke your replacement hip or fell off your chair lift or some shit. However, don't worry! The fine folks at BYOB have you covered for every eventuality.

when calling 911, be sure to be a little extra adventurous and not be boring on the phone. try exaggerating a bit to entertain the operator. they do this all day, so think of what you can do to keep them on the edge of their seat

Ask the operator if they have an emergency, they'll be much more helpful to you if you show them a common courtesy that hardly anyone else does these days.

operator: "Hello this is 911 what is your emergency"

me: "I will tell thee of my emergency if thou shalt answer these riddles, three"

o: "Sir I don't have time for this, what is the nature of your emergency"

me: "Ah anxious, aren't we. What has 2 legs in the morning, but only 1 leg in the afternoon"

me: "incorrect my fair lady, 'tis my uncle, there's been a horrible accident"

911 operator: yes hello what is your emergency

me: IN A WORLD *thumps hand on table* where ANYONE can be president *thunk* where people live in terror *cues mp3 of suspenseful film music* where there is sadness and loss *sniffling noises* sometimes love . . . finds a way *music resolves to major chord* and sometimes vegetables *music swells* find a way inside your butt and don't want to come out

Me: First there was a murder, then the guy that did it committed suicide.

Op: You have to call twice for that.

me: Please send help! We've just been in a horrible car accident at 3rd and Vine! My wife's unconscious, my daughter is bleeding and her seat belt is stuck, and I think the other driver might be dead!

operator: (long pause) Sorry what was the first thing again?

me: My wife is unconscious!

me: It's...a car accident. At the intersection of 3rd Street and Vine.

o: Ok, and what did you say happened to your wife?

o: And your children are what again?

me: It's just one child.

me: She's bleeding. She's conscious, but she's in a lot of pain and...

o: Whoa, slow down. (pause) So it's one child, and you said she's bleeding but conscious?

me: ...You know what, I'm just going to walk into an ER and tell them what I want.

operator: 911 what is your emergency?

o: what's the nature of your emergency?

o: *sighs heavily* are you ok? what's your emergency? *whispers* you do realize I'm at work, right?

me: I'm glad you asked mom, I'm not doing so well actually. I was kinda hoping you'd be able to lend me a little cash so I can pay rent and whatnot.

o: I'm sorry sir but I think you have the wrong number.

me: I promise I'll pay you back this time!

o: sir please state the nature of your emergency

me: ahhh well....no, no nevermind don't worry about it

o: sir are you okay?

o: sir please don't embarrass me in front of my operator friends 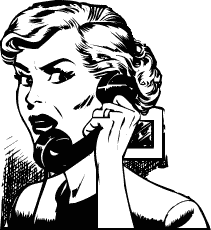 Me: I had to pay $5 for a coke at the bar but a can of it only costs $1 at the vending machine across the street and the door person won't let me go and get a can and bring it in unopened they would rather me pay 5 times more for a cup that's roughly two thirds the size of the can, but not only that it is the fountain kind and I suspect it's not only watered down but they also put in enough ice to fill about half the cup so the amount of actual cola is in the cup is roughly equivalent to maybe at most a third of a can of coke - I would measure it out but I lack the proper equipment to accurately measure the amounts as, again, the door person would not let me bring in my backpack where I keep an assortment of tools and devices that allow me to measure things like the volume of actual cola I received in the beverage I paid $5 for at the bar tonight - so assuming that I'm paying for a third of a can of coke for $5 that makes the mark-up close to 15 times more which is in my opinion at least either very criminal in nature or at least very amoral and that I think it should be illegal to overcharge me that much for a cola just because I don't like how alcohol makes me feel and the only reason I'm here is because my roommate was concerned with the fact that I haven't left the house in several weeks and he thought I would enjoy spending some time out of the house which I am not at all I would much prefer to be at home so maybe you should arrest him as well for being very very wrong and putting me in this vulnerable position where I am not literally but very much in the spirit of being robbed by having to pay so much more for so little cola.

911: Hold tight, sir, we're sending someone as fast as we can

op: hey lil man my name is Ron Pryor, and the rhymes i'll be dropping are some real hot fire

me: please god. please not this again. i am the one who is actually on fire. please send the fire department or a least a dalmatian with a water bucket in its mouth. preferably wearing a little fireman's hat

op: ooo what a shame, got a real tough crowd, i'll just spell out the link to my soundcloud: H T T P COLON FORWARD-SLASH FORWARD-SLASH...

No you hang up first