As it turns out, August can be all bad. Only one of the five movies out this week even approaches what a sane person would consider good. A big budget Teenage Mutant Ninja Turtles movie courtesy of Michael Bay is one thing. A slapdash found-footage movie about tornadoes is another. But another one of those lousy dance-off movies, something about Helen Mirren hating Indian food and Zach Braff making it rain Kickstarter dollars? Come on, August. Get outta here.

EXPECTATIONS: A few days go, I wondered aloud if movie critics whose work I don't read should be paid for their opinions because they didn't like a movie I like that was based on a book that I really like and directed by a man I really, really like. Unfortunately, I hinged my polemic on a movie few people gave a shit about or saw, so I decided that I would dispatch my creative director and longtime VICE colleague Annette Lamothe-Ramos to the multiplex downtown to watch Teenage Mutant Ninja Turtles and to decide, on my behalf, whether I could make a similar case for a movie that's too big to fail in the hopes that someone will give me the attention I deserve as a fan of that obscure writer Cormac McCarthy and the obscure comics, movies and TV shows upon which this new iteration of Teenage Mutant Ninja Turtles is based.


Thirty minutes later, Annette texted me from the multiplex bathroom, a.k.a. the situation room. "I think Vernon Fenwick is so fucking creepy in ways that he wasn't before, and you can't tell what the fuck is going on in the first fight scene," she wrote. I cut her off. "Great! Sounds like what I was hoping for!" (I'd already lied in an email to my good friend James Franco and his "production partners," whoever they are, about having seen and enjoyed Teenage Mutant Ninja Turtles, so I was committed to catching this one in theaters, at least so I could elocute on the subject the next time I run into my good friend James Franco, to whom I lie constantly about movies I've seen.) And then Annette sent a follow-up text about the trailer for Paddington, and I quietly vowed to punish her for her disobedience. With that, I cranked the new Rise Against album and drove to the city, confident in my status as my good friend James Franco's office husband and a bona fide hero for the Third World.

REALITY: Teenage Mutant Ninja Turtles is the Turtles' fifth outing on the big screen, but I suspect critics haven't seen the previous four movies or five animated series, just as I suspect they haven't read any of the 129 comic books, because this movie currently holds an aggregate 33 percent rating on Rotten Tomatoes and a slightly more acceptable score of 6.4 on IMDb. As Turtles co-creator Peter Laird said upon seeing the 1987 animated series that mainstreamed his creations and differentiated them through colored masks, "Das'um fuckin' goddamn bullshit." But Peter Laird is probably dead and I'm too busy reading Cormac McCarthy (seriously, did you read his screenplay for The Counselor?) to read goddamn comic books, so I judge all Turtles media against the animated series. So do critics, apparently, because they're quick to say this movie isn't as much fun.

Duhhhhhh. It's Fucking Ninja Turtles, simpletons, and it shouldn't be fun. My least favorite episodes were the ones in which the Turtles are having fun, and I'm happy to report that this movie balances a teensy bit of fun to keep the children drooling against a whole lot of rumination on the post-9/11 political landscape: bio-terrorists, Foot soldiers that look less like ninjas and more like a paramilitary unit, torture, collateral damage, terrified New Yorkers running through Times Square to evade falling buildings. They could've easily called his movie Zero Dark Turty (no, not Turdy, simpletons) and it would have been apropos. The conspicuous lack of fun is this movie's raison d'être. Some would say it's my raison d'être.

Instead of giving us some rollicking adventure in which the Turtles must save April O'Neil from Shredder's clutches, director Jonathan Liebesman has given us a rollicking adventure in which Shredder beats Splinter within an inch of his life à la The Dark Knight Rises, three of the Turtles are tortured until only intravenous adrenaline injections can return them from the brink of death, and April divides her time between fending off Vernon Fenwick's creepy come-ons ("I know you're not a fancy-dinner kinda girl, so I figured an abandoned underpass in a creepy neighborhood is more your thing") and butting her head against the glass ceiling held in place by a female news executive who believes that a newly minted journalism degree and a pretty face translates well into fluff pieces. Who needs fun when you've got the brutal reality of institutional oppression? 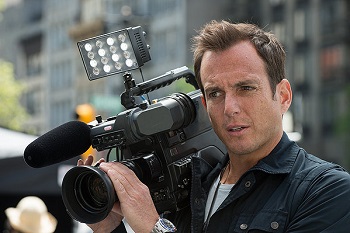 On the next season of Arrested Development...

Elsewhere, Liebesman proves he's a Hollywood rebel and rejects conventional notions of spatial coherence by editing fight scenes and moving his camera so no one can tell what the fuck is going on, pokes fun at the industry's over-reliance on ShakyCam by filming rote exposition with ever-vibrating handhelds, and casts William Fichtner against type as a duplicitous weasel who seems good at first but ultimately proves to be the big bad in a refreshingly dull plot twist. If Teenage Mutant Ninja Turtles has a flaw, it's that it grows incrementally more tolerable on its way to a somewhat enjoyable climactic chase scene. Why should you enjoy anything when people buy their fianceés cheap diamonds plucked from the ground by some doomed child miner in Africa and drive big SUVs that are literally fueled by war? I sure as shit don't. I fast-forward through old Turtles cartoons and slow down to watch it only when Splinter looks especially somber. Then, I mute the volume and pretend he's bringing his Turtles up to speed on the Israeli-Palestinian conflict and other shitty signs of the ever-declining human condition.

In that sense, Liebesman remains true to the Teenage Mutant Ninja Turtles spirit, but I can't help feeling like my good friend James Franco would have pulled it off without including any fun at all, replacing the film's two jokes that work with shots of the Turtles shitting and wiping their shitty asses or maybe fucking April's corpse. I guess, for reasons of "full disclosure" or whatever, I should mention that I'm James Franco, Rocco Castoro is a pseudonym James Franco uses to lavish well-deserved praise upon James Franco, and James Franco's next project is a below-the-radar adaptation of Blood Meridian, for I am the only screenwriter capable of adapting Blood Meridian, an obscure Cormac McCarthy book you probably haven't read.