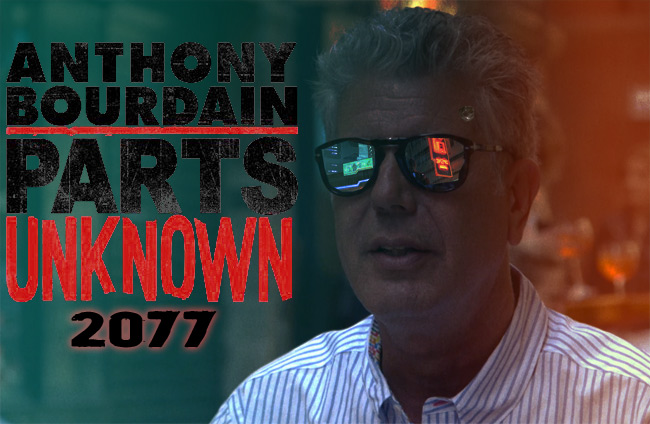 At Yaxatori AD, it isn't about the chrome, it isn't about the hotware you're chipping, it's about friends and good food. The smell of stewing soyblank is the same here as it has been ever since Chiba City was hit by the EMP. This is food you could cook on a Kawasaki engine by the side of a neon-washed scrapheap with your bosozoku bros, but it is being made with fresh ingredients, local flavor, and all the love of an AI hotstack engram-mapped from the dying brain of a Japanese grandmother. This is real food and it's good. 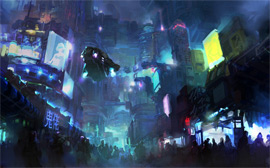 Sometimes you want the sort of thing that is going to hit your guts like an expanding tip bullet at the beach. You want heavy. You want greasy. You want Zone Dump. It looks like a giant dumpster and seats five. The seafood is fried by an octolimb cyberform with a natural hotstack slotted straight out of a zone killer named Felix.

You heard that right. Felix is a German Jew zone trooper making traditional Chinese street food. He has left the slag wars to Eurasia and now he pan-fries your choice of vat-grown fish in one of eight woks he has going at all times. The sizzle never stops and if you aren't waiting for your plate when the order is up, your fish just might go in Felix's beak. The hustle, the melting pot of influences, the streets full of expats, the lab tech, can be tasted in every bite of pepper glazed bream. That, my friend, is what makes Neo-Shanghai my kind of town.

Zer0ki11a is doing something different here in the kitchen of NoDICEY. He's serving up plates of nothing and then using a cybervirus to make you think you're eating fractal butterflies, faerie legs, and prickly alien eggs. You walk into NoDICEY and it seems like a joke. A bunch of customers are pantomiming eating from their empty plates. But then you get that buzz at the peripheral of your hotstack. Just a little static. "It's my 69-420 unicorn steak," says Zer0ki11a. And the plate comes out and you get it. It all makes sense. I really like this. 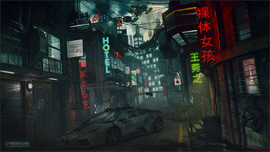 Full body conversions and cyberform resleeves need not apply at Bloodin/Bloodout. When you step through the doorway, you enter a hazy neon maze full of pounding techno and cackling goblinforms. Am I awake? Is this a nightmare? Someone just pinched me. It turns out, that little blue goblin was taking some of my blood. In the kitchen, the protein vats recombine your DNA into nutrient-rich meat and produce steaks to order. From the hanging chairs made of cargo netting, you tell the gene-coded drone waiters exactly how you want yourself cooked.

It's this tech-hungry playfulness that is drawing outlaw chefs from all over the world to the Cannibal Wastes of the Great Ecuadorian Quake Zone. It has drawn me too, changed my expectations, and now it won't let go. 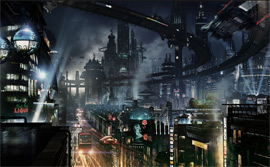 It's possible to have a terrible meal in a great food city. Chow down on a reheat mycomeal from ValuEat, a fake choco soylent shake straight from the nozzle, or cram yourself full of strip steak from Applebees, and you might as well be admitting your empathy is zero. If you want real food in New York, good food, you have to take chances. I met my fixer at a warehouse in Little Haiti. He put a black bag over my head and drove me to an unlicensed parasite restaurant in the hold of a Russian cargo ship that ran aground during the Days of Rage.

At Dying Insides, you trade information for a meal of exclusive parasites. I gave up hacked banking info for a New Jersey private school in exchange for a meal of black market exotic parasites. I had vinaigrette tossed tapeworms from a senator's toilet, mango fly larvae extracted from the back of a Broadway singer, and barnacles off the nose of the last whale in the Arctic Ocean.

After the meal, I was threatened at gunpoint by a Vietnamese cyber psycho named Lucky Lu Bao. He was the chef. He kept telling me that we are the real parasites - the media and humans in general - and he was going to feed me to his customers. He didn't count on me hiring a street runner team as backup. Cipher sniped him with an antitank rifle through a wall. As Lu's head exploded in a mist of blood and bad chip blackware, I couldn't help but thinking that maybe he had a point.

They say you Judge Dredd in the Megacity, but shouldn't we really judge ourselves? So long as we are willing to sacrifice real food for a prepackaged corporate experience, safe and sanitized, we are depriving ourselves of what it means to be human. At that point, we might as well be the tapeworms we should be eating instead.