A good way to establish yourself on the Something Awful forums is to promise your peers that you will animate their bizarre scenarios. Of course, if you are unable to do so successfully, you have established yourself as a dishonest failure! But bold newcomer I Love Badgers, who brazenly solicited ideas after just five days on the forums, converted the suggestions into a two-and-a-half-minute YouTube video, and it's, um, really something. The best way to present it to others -- at least those others who consider randomness the height of amusement, which is pretty much everyone on the Internet other than our readership -- is to link it to them without context. But to give proper credit to the people who came up with the script, here's the full sequence in chronological order!

A sentient hypercube gets caught in a vacuum and is turned inside out. 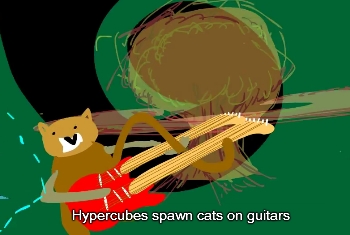 A man is crushed by a landing blimp.

A boot stomping on a human face - forever. The boot and face belong to the same person.

Richard "Lowtax" Kyanka gleefully rolls around in a pile of

A van is hit and all the people and things inside roll against the gravitational force.

A sad emperor palpatine shooting rainbows from his fingers instead of lightning. 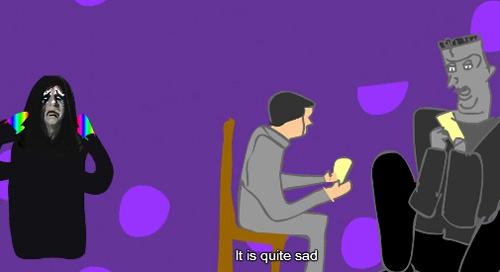 A mans heart bursts from his chest, but it's a ROBOT HEART!