I recommend Rare Exports. It's a weird low-budget Finnish film about the "real" Santa Claus. I suggest being just sober enough to deal with subtitles, and no more than that, as well as a healthy respect for how weird Scandinavian myths can be. If you've read this far, at least one of those should be covered.

Hey, I made the illustrations you see during the opening credits! They're sort of related, so I'll post them here. 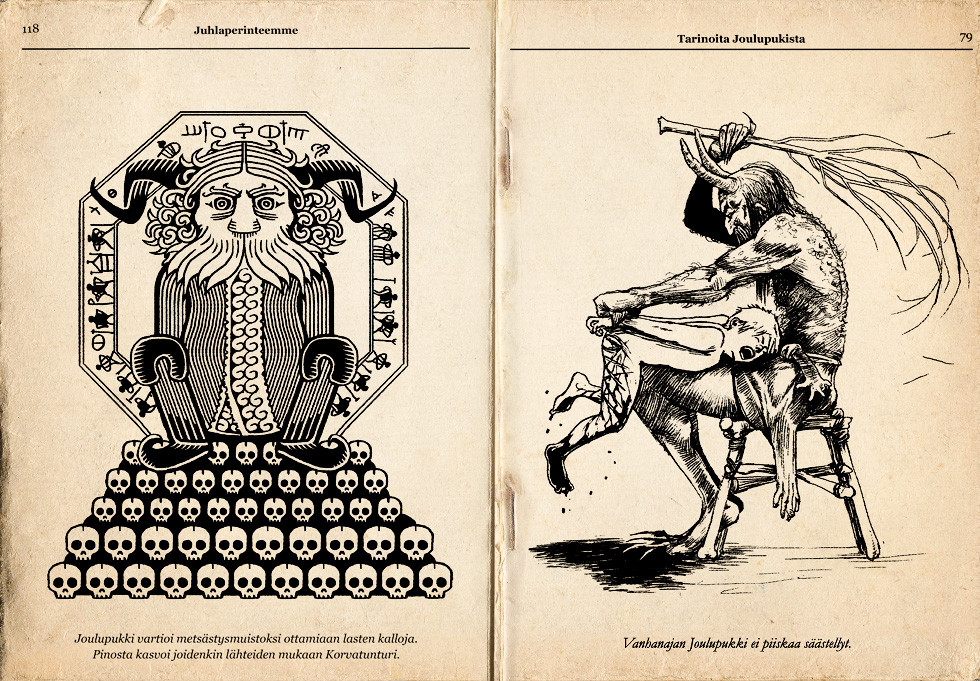 Left: Santa Claus depicted as guarding the skulls of children taken as hunting trophies. According to some sources the pile grew so large it became Korvatunturi, Santa's mountain home. 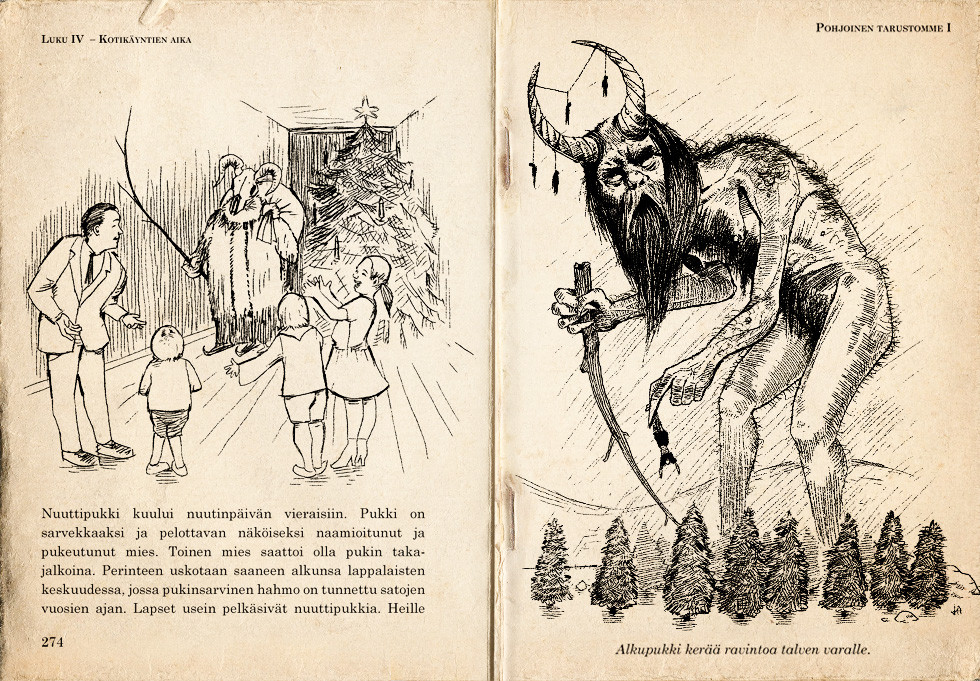 Left: Nuuttipukki was the traditional guest during St. Knut's day. Nuuttipukki was a man dressed up to look frightening. He usually wore animal horns, and on occasion there would be two men inside the costume, one playing the part of hind feet. The source of the tradition is believed to be the lore of the lapp people, where a goat-horned figure has featured for centuries. Children were often afraid of Nuuttipukki. To them -


Right: The Ur-Santa collecting food for the winter. 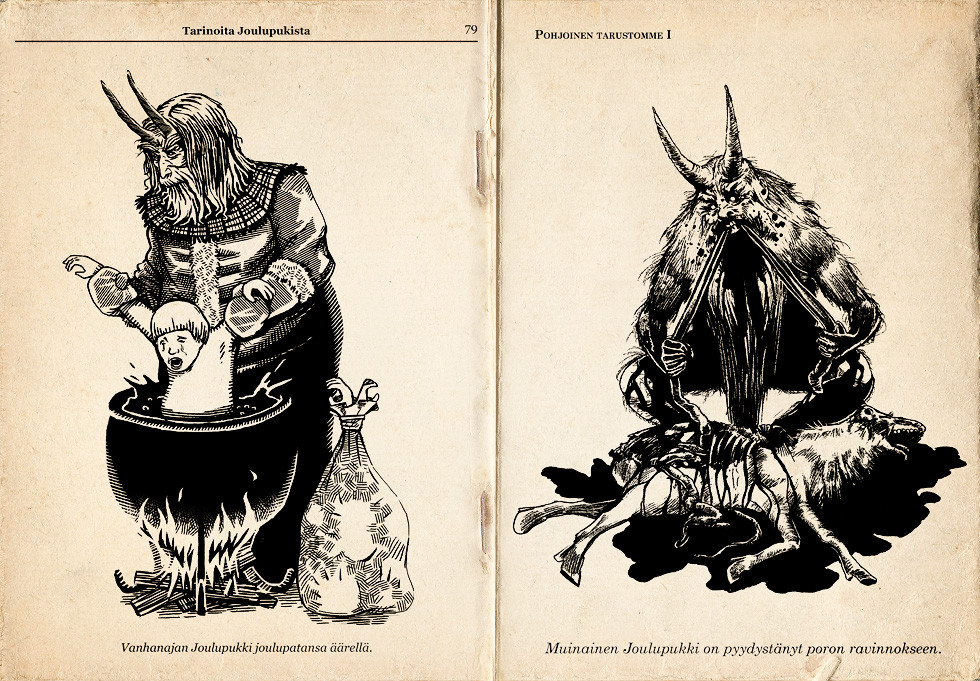 Left: An old-fashioned Santa Claus at his Christmas cauldron.
Right: An ancient Santa Claus has caught a reindeer.


Nuuttipukki was a real tradition in Finland, by the way; all the rest of what I posted is fictive. As in, not even myths, just stuff dreamt up for the movie.

After Christmas, around St. Knut's day on the 7th of January, groups of people, old and young, but mostly young adult men would dress in old, threadbare clothes and furs worn inside out. Men would dress in women's clothing and vice versa. The main part of the costume, however, was a pair of horns and a mask made from animal leather, wood bark or paper, such as this one from Sipoo, ca 1800: 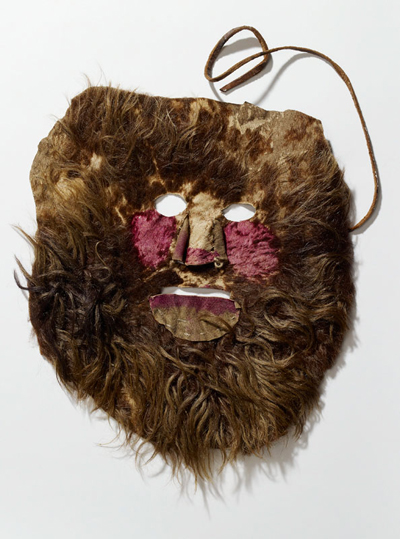 They would go around their neighbours' houses, demanding beer and drinking it in copious amounts, singing rowdy songs and playing pranks if the hosts were stingy with the beer. The day was known as Nuutti's day, but also as Yeast-nuutti or dregs-nuutti, because the beer barrels would have been almost empty at this point in Christmas celebrations.

It was believed that dead relatives would come visit on Christmas, and that they would have to be evicted after the celebrations. And the best way to do that would be in disguise, so they wouldn't get angry at any living relatives. This was the premise for people to go around drinking the last of their neighbours' beer.

The celebrants were supposed to remain unknown while going from house to house, and the main entertainment for the hosts was to try and guess who the guests were.

The Nuuttipukki gang was lead by the Nuutti baron, who had a mask, a jacket made of straw, a hat of some description, a baton and a wooden sword: 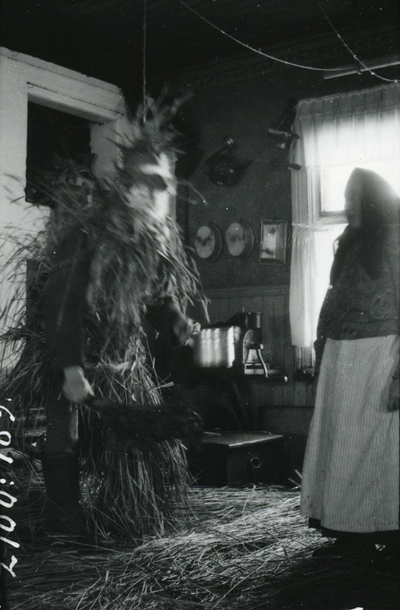 And yes, the children would be terrified, and people would drink beer and laugh at them.

Thanks again to Rulebook Heavily for the witty Lad introductions and helpful defense-against-Lad strategies! Also thanks to: Geisladisk for filling in with the Door-Slammer profile; Howmuch for uploading larger-sized Lad illustrations; the 1932-published poetry book Jólin Koma (Christmas is Coming) for being the source of those illustrations; Sierra Nevadan for coining the phrase "horrible festive beasts"; and Benito Cereno and klaivu for making awesome things in the past that proved relevant to this discussion! Happy Holidays, friends!