A Christmas Carol; The Men Who Stare at Goats

It's a slow week at the movies, yet no less awful. Joseph "Jay Dub" Wade gives A Christmas Carol a pass, and Ian "ProfessorClumsy" Maddison gives The Men Who Stare at Goats a fail, plus Movies That Don't Suck. (Also, it wasn't screened in time, but word has it The Box further cements Richard Kelly's "love him or hate him" status.)

A Christmas Carol, a.k.a. Much Ado About Jim Carrey, hews to source 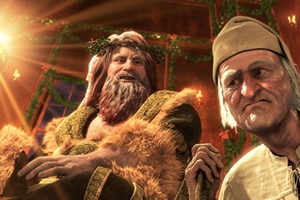 Remember when Bob Zemeckis made good live-action movies?EXPECTATIONS: I'm a sucker for a good Christmas movie, especially when it's based on the story by Charles Dickens. I really don't expect Jim Carrey to out-act the likes of Alastair Sim, George C. Scott or Scrooge McDuck, but I do at least expect Robert Zemeckis to offer an interesting spin on the material. Say what you want about the guy's most recent films, but I still trust the director of Back to the Future and Who Framed Roger Rabbit? to at least do the book justice. That the movie features more of his now-trademark motion capture animation is beside the point.

REALITY: By my count, Charles Dickens' novella has been adapted for film and television over sixty times. The role of Scrooge has been portrayed by such classically-trained thespians as Michael Caine, Patrick Stewart and Vanessa Williams. How, then, do you adapt the story once again for the High School Musical/Pixar/SpongeBob generation?

If your name is Robert Zemeckis, you really don't. Zemeckis' version of Dickens' tale is as faithful an adaptation as you're ever likely to see. Of course, given some of the truly great adaptations we've seen over the years, this is nothing special. So Zemeckis' decision to use his new favorite style likely has as much to do with his desire to try something visually different with the material as it does with his inexplicable hard-on for motion-capture technology. Then again, I'm willing to forgive the man his visual quirks because his films at least tend to be have well-structured narratives. (Except Beowulf. Don't get me started on Beowulf...)

Now, if you don't know the plot to A Christmas Carol, you've clearly not been paying attention in school, nor have you turned on a television in fifty years. However, if you do fall into the demographics that either hate reading or don't celebrate Christmas, here's what's up: 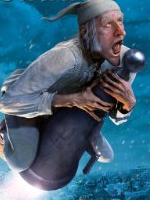 Nothing weird about this image, nothing at all.Ebenezer Scrooge (Jim Carrey) is London's biggest, richest asshole. On Christmas Eve, he's haunted by the ghost of his former business partner, who says three more ghosts will show him the error of his ways that night. The Ghost of Christmas Past (Jim Carrey) takes Scrooge back to a time when he wasn't such a royal dick. The Ghost of Christmas Present (Jim Carrey) shows him how much fun Christmas is for everyone not named Scrooge. Even his lone employee, Bob Cratchit (Jim C -- I mean Gary Oldman) and his fourteen kids manage to have a decent Christmas despite Bob's meager paycheck. Finally, the Ghost of Christmas Future (Jim Carrey, playing against type as his own shadow) shows Scrooge a future in which he'll die friendless and alone, as though he didn't already know that. Scrooge then wakes up and, realizing he hasn't missed Christmas Day, becomes the jolliest old bastard alive, redistributing so much of his wealth, even President Obama would tell him to knock it the fuck off. God bless us, every one.

Because I already knew what to expect as per the film's visual aesthetic, I concentrated my attention more on the story than the eye candy. One of the things I appreciated was just how faithful an adaptation this was. As much as I loved the Disney and Muppet versions as a kid, in 2009 the last thing I wanted to see was a dumbed-down morality play starring an overused comic actor hamming it up in the name of Christmas. Granted, that's kinda what this new version is, but it at least doesn't insult the viewer's intelligence. As far as I can tell, great care was taken to get the dialogue as accurate to the time as possible, and many lines were lifted wholesale from the original story. This meant that I didn't feel quite so stupid for sitting through a Christmas movie a week after Halloween.

But who cares about things like story structure and accurate adaptation these days? Awesome graphics are where it's at, right? I opted out of seeing the film in 3D, but I can't imagine it would've made much difference. There are a small handful of moments where someone points out at the audience, but that's really it. Additionally, much of the movie takes place at night, in dark places, so I'm not sure if much of the 3D would even register. If you're going to see A Christmas Carol, save your three dollars and skip the 3D. Without those stupid glasses getting in your way, you have more time to closely examine the character design. 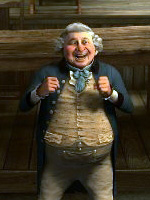 An actual potbellied colonial dwarf provided the motion model for this character.And, oh, the designs on these characters...one of the supposed benefits of motion-capture technology is that one actor can portray multiple roles. I actually felt this worked effectively with Tom Hanks in The Polar Express. It plays into the themes and underlying message of that film, so I'm willing to give it a pass. However, in A Christmas Carol, I see little reason to cast Jim Carrey in every other role. I guess Zemeckis wanted to get his money's worth, but if that were the case, we wouldn't have the likes of Bob Hoskins, Cary Elwes, Robin Wright Penn, Gary Oldman, and Colin Firth showing up for two minutes of screen time. Carrey portrays the Seven Ages of Scrooge, as well as all three Christmas Spirits, and it really is distracting.

The rendering on Scrooge's face is odd in that they clearly decided that the man's defining features would be a witch's nose and Jay Leno's chin. The result is possibly the first film character specifically designed for 3D. Every time he turns to face the audience, his nose swings out and threatens to stab you in the eye. It's a disconcerting experience. Then there's Bob Cratchit, who might actually resemble Gary Oldman if you're looking at him after downing a fifth of scotch. To sober viewers, he looks like Tom Petty might if somebody took a frying pan to his face.

The digital cinematography is quite impressive when Scrooge's face isn't taking up the whole screen. The numerous fly-throughs of snow-covered London are visually striking, serving as a primary example of why Zemeckis seems to love this technology so much. He can do things with the camera that simply aren't possible in live-action, but that still doesn't really excuse every character from being an utter eyesore. I'd say the best course of action is to close your eyes whenever someone starts talking. That way you can see all the eye candy and hear all the dialogue without having to stare at Jim Carrey for 90 minutes.

If you can stomach all the dodgy character designs in A Christmas Carol, you'll find a well-written Dickens adaptation set in an equally well-realized version of Victorian London. There's no way this will rise to the instant-holiday-classic status that The Polar Express somehow attained, but it's definitely a few steps up from Beowulf.