It's a surprisingly uplifting and positive week in the cinemas, with American Reunion exceeding Martin R. "Vargo" Schneider's expectations; Salmon Fishing in the Yemen managing to charm Joseph "Jay Dub" Wade; and Titanic finding its way back into the life of Sean "Keanu Grieves" Hanson.

EXPECTATIONS: I'll admit that I have a soft spot for the first American Pie movie, even if it did indirectly lead to the creation of the film MILF. What makes the original Pie a strong movie set apart from other films of its genre is that it has a certain sweetness to its raunch, like a proto-Judd Apatow movie. Apart from the pie-humping and jizz-drinking, it's a story about the naivete of young love and about a father and son learning to understand and accept each other. Then the whole thing had to go to hell and become a namesake for direct-to-video hellholes, National Lampoon style. So you can understand my trepidation when I go into this cavalcade of people without careers.

REALITY: Okay, let's get this out of the way: American Reunion has a ridiculous premise that is never quite explained. Apparently an entire graduating class was unable to make it for the 10-year reunion, so everyone gets together for the 13th anniversary of their graduation? Sure, this makes no sense, but we can get past it. Just accept that the real reason for a 13th anniversary movie is that Tara Reid is about to melt. 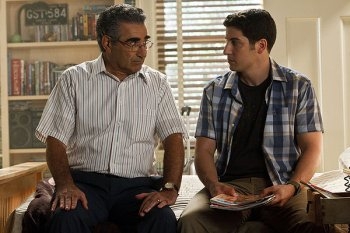 Son, did you ever see the movie Goon?Anyway, yes, the whole crew of the franchise is back in town for a reunion of sorts, and most of their lives haven't turned out like they planned. Jim (Jason Biggs) is a father, in a sexual rut with his formerly nymphomaniac wife Michelle (Alyson Hannigan). Oz (Chris Klein) is a washed-up sportscaster whose claim to fame is turning on old ladies with his ridiculous turn on Dancing With The Stars. Kevin (Thomas Ian Nicholas) is in a fairly happy, albeit domesticated marriage, and Finch (Eddie Kaye Thomas) is a motorcycle-riding, world-touring badass. Meanwhile, Stiffler (Seann William Scott) is a low-ranking suit at an investment firm of some sort, it doesn't matter. The point is, these guys aren't that pleased with themselves. Once home, they encounter all their lost loves, past minor characters (like John Cho, who shows up to point out how much more successful he is than anyone else), and a girl Jim used to babysit who is now 18 and beautiful ... and a stupid teenager like all of these guys used to be.

My greatest concern going into this film was the simple fact that I'm no longer 14 years old. Sex is no longer a mythical unobtainable unicorn, and the fact that I have a penis and other dudes also have penises is no longer that funny. Which is why I was so pleasantly surprised with the quality and maturity of American Reunion. It's decent enough to get all the things it feels like it's supposed to have out of the way. The sock shows up, there's some porn, something bad happens to Jim's penis, et cetera. The first half-hour is a bit of a slog, but then something amazing happens: The movie actually grows with the characters.

When these guys finally accept that they're adults, and that this is not terrible, the jokes evolve and they get funnier. They start doing what real people would do, like talking to their wives, and then the whole movie matures. It's a perfect slam on the terrible tendency of comedy sequels to just toss out the jokes from the first movie, because they were funny then, why not now? Instead, directors Jon Hurwitz and Hayden Schlossberg (The creators of Harold and Kumar) say "Hey, that stuff that was funny in high school? It was funny because we were in high school. Let's remember it, laugh, and move on." This theme is prevalent pretty much through the whole movie. 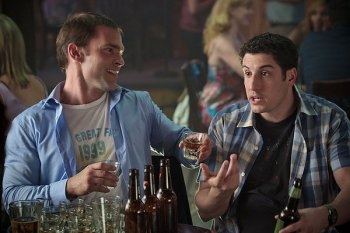 Dude, tell me you saw Goon!The highlight of the film, as in the first film, is Jim's relationship with his father (Eugene Levy). The film really hits its stride while Jim is getting his Dad ready to start dating after his mother's death, going through a dating site like Jim uses in the first movie's montage. (That's how you do a callback!) While the first movie was partly about a father helping his son through a difficult time in his life, this movie is about two sons helping their father through a rough patch in his life. That's right, I said two. Stifler gets a decent character arc for once, and his relationship with the rest of the cast is evolved. Jim and Stifler take a shoulder angel/devil approach to Jim's Dad, culminating in a meeting between Jim's Dad and Stifler's Mom. These are the only two parental figures in the entire franchise. Seriously, if these guys have known each other their entire lives, how does nobody know each others' parents?

It makes sense that this story is mainly from Stifler's perspective, because he's the one most likely to have peaked in high school. It even shows physically, as Seann William Scott has definitely put on some weight. But while the character might be past his prime, Scott makes him incredibly funny. He's got a Liar Liar-era Jim Carrey thing going on, and it is clever as all hell.

Ever since Young Adult, I've been thinking a lot about the idea of a generation-defining picture and, strangely enough, American Reunion seems to be one. I won't out all our ages, but the CR crew consists of males between the ages of 24 and 29, and that's the target audience of this film. We're at an age, and at a point in history, when we're redefining what it means to be a man. Its predecessor set out to show that the teenage idea that sex=manhood is bullshit, and this film does the same with the idea of being emasculated and reclaiming your masculinity. The reason Stifler is so important here is that he is the most neutered and has the hardest time accepting this. The best scene in the movie comes from him accepting himself, having his friends accept him, and then telling off the incarnate of every "I'll be your boss someday!" self-loathing nerd fantasy on the planet. Steve Stifler stands up for the poor misunderstood jocks, because we're old enough now to understand that nerds were terrible in high school too. Most of this movie is, literally and metaphorically, looking at a high school yearbook saying "What the hell was WRONG with me?" 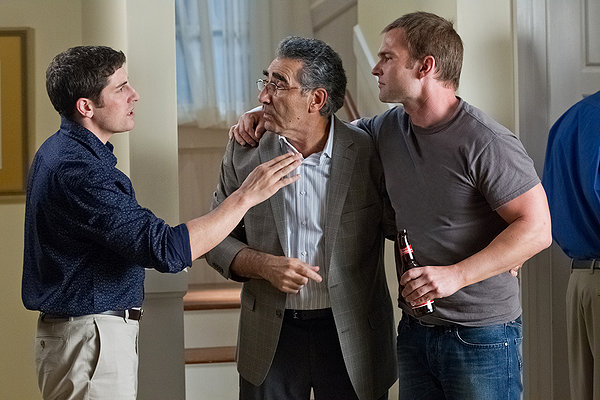 All right, fine! I loved you both in Goon! Happy now?

American Reunion still piles on the tits and shit jokes, but they work because they're not just there for the sake of being there. They work with the script, and they're actually very funny. There's a great sense of timing in the film, as all the jokes lead to the slightly insane first-act situation, then level off to build to the second-act payoff, then finally pull out all the stops heading toward the big third-act climax (yes, I used that word intentionally). All the sophomoric humor serves its purpose in this, and it's reassuring to the generation of fans of this movie that we can be adults with responsibilities and still laugh when someone poops in a cooler.

Yes, there are flaws, like the fact that they're still writing girls as adolescent sex fantasies (even while being hilariously aware of the ridiculousness of it), and there's a character we're supposed to root against for getting his girlfriend stolen and his face punched in the same night, but as a whole, the film is good enough to get over this. This entire box-office weekend is geared toward one audience, and while Titanic is reminding us all how old we've become, American Reunion is pointing out how young we were, and how much better off we are now.

MINORITY REPORT: Man, Marty's finally right about something: Between American Reunion and Titanic, there's a lot of weird generational shit going on this weekend, as the youth of today flock to capture an experience we had as teenagers. It's like Hollywood is forcing us to pass the torch to these googly-eyed text-happy little shits and resign ourselves to being old as hell. - Sean "Keanu Grieves" Hanson