I volunteer for the PTA (Parent Teacher Association) of my kids' elementary school, and we recently finished holding a book fair. If you were a kid who lived under the shadow of the global Scholastic Children's Books Empire, you almost definitely remember what I'm talking about: We bring in hundreds of brightly colored kids' books and displays, and students can buy them.

It's really rewarding: A kid walks in who doesn't know what they like to read. I ask them, "if you could do anything in the world, even if it was impossible, what would it be?" They answer something like, "ride a unicorn," "be a superhero," or "play Minecraft," (it's usually Minecraft). I lead them to a book on the topic (usually minecraft). They examine the book for a while, before finally deciding on a purchase (usually scented highlighters).

But sometimes the students know what book they want when they walk in the door. When I wasn't busy cashiering and potentially spreading Covid-19 to the entire school district, I would walk the shelves to see which books kids were buying most. The best-selling book was Mulan, a story based on an upcoming Disney remake about a Chinese girl who faces harrowing oppression, despite looking pretty white.

But the second best-selling book left us baffled. It was flying off of shelves, the 4-through-11-year-olds of Sunrise Elementary couldn't put it down. And we couldn't figure out why. 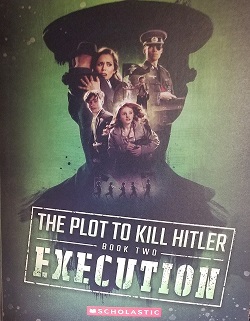 We couldn't keep this book on shelves, we had to reorder after the first day. Because of all the commotion and our morbid sense of humor, we PTA people have been collectively referring to the book copies as, "Hitlers." As in, "wow, those Hitlers sure are selling fast," "we're running low on Hitlers," and, of course, "we need more Hitlers."

But the dark jokes covered a deeper concern: Aren't single-digit age groups a little too innocent to be exposed to the graphic horrors of concentration camps? (Note: In the draft of this article I am currently looking at, I have written "need to put a joke in this paragraph," but I think I'm gonna just let it go.)

I was particularly troubled. As a child, my rose-colored glasses were ripped off early. Also, I was an only child and a latchkey kid, so I spent a lot of time taking care of chores and discipline, myself. I didn't have a bad childhood, which is more evident now than ever before as the entire World has become a latchkey kid. I just wish I could remember a time before everything wasn't so Very Serious. That's why, when it came to my 7-year-old twins, I needed to make sure they were protected from being exposed too early to one of the greatest war atrocities of all time.

I asked my kids if they knew what the Holocaust was. They proudly answered, "it's that place with the big shopping carts that sells hot dogs and pizza!"

My next interview was the school librarian, after all if anyone knew why kids were gravitating to certain books, she would. "Why do kids love Hitler so much?" I asked her. She was so startled she dropped her car keys in her driveway. But once I explained that I was a credible journalist trying to research a story for the serious news franchise Something Awful Period Com, she put forth a few theories.

First of all, she explained, American boys LOVE learning about WWII. That makes sense: American history books love to tell the tale of how OUR TROOPS valiantly stormed the cliffs of Normandy with absolutely no help from anyone else (except Britain and Canada). How they pushed back the villainous German line, all the while keeping their heads up to block the bullets and protect those behind them. It's certainly the most recent American war in which we didn't make everything a writhing snake-orgy of disaster.

So the market was there.

The librarian then showed me a video trailer she had been playing for each class, which had a short ad for the Hitler book. It begins, "my name is Max Hoffman. I'm just a typical German kid: I play soccer. I fight with my sisters. I take shelter during air raids and pray an English bomb doesn't hit my house." While examining dark, emotionally traumatizing situations is extremely my jam, I still expressed concern that the target audience was too young. She explained to me that this ad was only shown to 4th-to-6th grade classes. So my kids weren't being targeted, which was a huge relief.

But my job wasn't done: I needed to know exactly what was in the book in case concerned parents reached out to the PTA about their child using hard-earned tooth fairy cash to buy books about Hitler.

So I bought The Plot to Kill Hitler: Execution and read it. It tells two stories: One of a high ranking German officer plotting to blow up the Fuhrer and the other of a Jewish boy forced to stay shut inside a dingy apartment while Nazi Youth patrolled the streets outside. However, it had clearly been edited with the 9-to-11-year old age group in mind: Concentration camps are only vaguely mentioned, there aren't any scenes from the actual war, no children get burnt alive when the Nazi Youth headquarters gets firebombed, the usual stuff.

I then started searching around the Internet for any book reports children may have done that hilariously misinterpreted the events portrayed. I didn't find any, but I did learn the shocking fact that there's another children's book with the title The Plot to Kill Hitler. It's recommended for a similar age group as the other: Grades 5 and up. So when it comes to my kids' innocence becoming totally shattered by the wicked ways of war, I have about three years left.

I can work with that.

Evan "Drunk Nerds" Hoovler has a new book, Teaching with Comedy, published by Kaplan. He and two other goons co-own the fantasy football comedy conglomerate, Football Absurdity. Check back every Thursday so he can sell you shit at the end of his weekly column.