That's right! We finally secured funding for the sixth film in the Jersey Trilogy, tentatively titled "Derogatory Term For Slacker Twentysomethings: Funny Word After Colon." We're currently tinkering with the tag line - I suggested "Just because they do something doesn't mean they have to do something," but corporate's pushing for "Punchy, two-sentence sarcastic comment. Balls." After fighting all this time for just for permission to do the project I'm inclined to let them win the battle, but we'll see what the future brings.

Of course, when you're dealing with the suits there's bound to be some bad news. I'm sad to announce that, at this point, only 85 or so of the actors from my previous movies have signed on to be a part of "Derogatory Term". I really hope that number rises - coaching newcomers to talk for five minutes straight without breathing can be a chore - and nobody's saying that's not going to happen. I just know it takes a true friend to rail my supermodel wife on camera. If it weren't for them, well, I don't know what I'd do. Sometimes I honestly feel like Darth Vader walking through Mordor while Magneto's trying to give him a handjob. I'm lucky in that my friends are constantly around to show me love and support, even when times are tight and I can only afford to buy them one new car a month.

I'm getting too mushy here so I'll sign off. I just wanted to share the good news with my true fans, you readers. Until next time... 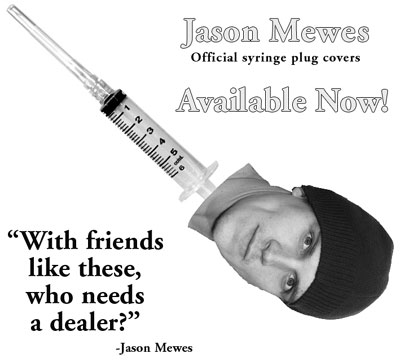 Got off the phone with Jen. It's so good to hear her voice in the midst of all this hard work. She's in Aruba, undergoing extensive training with her tennis coach. She says it'll make her better in bed, and if there's one thing you readers know it's that I love having sex with my wife (Jen) (the woman I have sex with) (I've had sex with a woman). She's supposed to be gone a few weeks, so I set her up with a platinum card and a private jet and told her to have fun. I love the way her eyes light up when I give her things like that solid gold plaque of my face, even if she does get confused and hang it up backwards over and over.

You've got to sit and wonder about who you are and the people that shaped you sometimes. I'm about three Zimas into the evening, and I'm drunker than I've been in months. Who is this person they call "Kevin Smith"? A director? Sure, I've madethe same movie seven timesseven different movies, and they were almost all hits. An actor? Yeah, I've been in all my own movies and a handful of others, and my style has been described as "like on the Gilmore Girls, but without inflection". But neither of these things matter. I am a lover. I am a husband. Assuming Jen gets over this horrible disease that makes her vomit when she sees my genitals unless I give her $10,000 first, I'd like to be a father twice over.

None of these things would be possible without Jen. I love and respect her with all my heart. If I didn't, all the blogs about three-ways I've had with her and another woman would be impossible to write. Without our love, a tender, caring thing, there would be no nude pictures of her making out with a guy dressed like Superman. She is a goddess, and every time she leaves my loving arms - even if it's for a few hours to show the pool boy how the pump system in the shed works - I miss her truly.

There are going to be mistakes. Marriage is a trial and error system. It's a hard thing to take when you give your wife a handful of sugar cubes and spend the rest of the night trying to fit a diamond ring around a horse's hoof. I now triple-check my emails to her to make sure she can't misconstrue "pick up some eggs on the way home" as "fellate my best friend on the bed we share." So what if the bathroom was dark and I mistook her for the thing from Room 217 in "The Shining"? She is a woman and I have sex with her. I have sex with my wife, Jen, and I would pay any price for it. Even $10,000, which is what I frequently pay.

Love, ain't it crazy? I'm cracking open my fourth Zima now. It's going to be a wild night. Maybe I'll cruise town later, try to find the ditch Jason's sleeping in as part of his rehab therapy. He tells me they go so far as to make him shoot fake heroin and pass out in public, and I'm glad to pay for his continuing recovery. I am a husband, a lover, and a father, yes, but I am also a friend. Goodnight, gentle readers. May love be as kind to you as it has been to me.