Comedy. The word can mean so many things, but generally in a cinematic context, it evokes in people a desire to see something that will make them laugh. We have three comedies this week, but only one has talking animals.

EXPECTATIONS: It had to happen sooner or later. After seeing Kevin James kick Vince Vaughn in the nuts in that one movie, I actually gained some respect for him. Sure, he's no great comic actor by any stretch of the imagination, but he had arguably the most difficult role in The Dilemma, and he pulled it off nicely.

Now, James is about to piss all that goodwill down his leg with this Zookeeper farce. Honestly, is anyone expecting this to be good? The animals have wacky exaggerated voices; the monkeys are probably gonna throw a bunch of poop jokes; it's like this movie is tailor-made to piss me off. I'm automatically expecting the worst, so there's no conceivable way I can be disappointed. Alright, Zookeeper. Let's do this.

REALITY: Zookeeper is a lie. From top to bottom, start to finish, everything about this movie is 100% false. I thought that by walking in with the lowest of expectations, I might spare myself the headache of being royally pissed off at another talking animal movie for children. That was wrong of me, because Zookeeper somehow managed to find new ways to disappoint its audience; ways I hadn't considered or even thought possible from a PG kids movie starring everyone's favorite fat person. 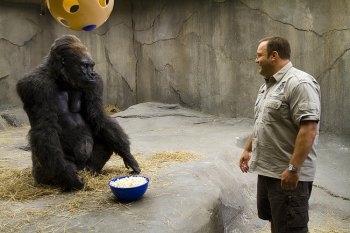 And then the gorilla rips the fat man's head off.The movie opens on a gorgeously fake-looking seashore, where average, schlubby zookeeper Griffin (Kevin James) proposes to his girlfriend Stephanie (Leslie Bibb). Instead of saying yes and crying for joy like regular women might, she says no because she can't be married to a lowly zookeeper. Five years later, Griffin is still a zookeeper who genuinely loves his job, and Stephanie comes back into the picture. The zoo animals start talking to Griffin, giving him mating advice in an attempt to help him win her back. Griffin winds up competing for Stephanie with her other ex-boyfriend Gale (Joe Rogen); meanwhile, Rosario Dawson hangs around in the background as a fellow zookeeper who may or may not have feelings for Griffin.

This means that one of two things happened in the Writers' Room. The first possibility is that Kevin James and four other writers started out writing a rom-com about a zookeeper, only to add in talking animals as a necessity for the plot. This seems highly unlikely, as it makes way too much sense from a screenwriting perspective. The other possibility, and the more likely one, is that Kevin James really, really wanted to make a romantic comedy about a zookeeper, but Adam Sandler and his bean counters said no. Then, James went back to Sandler and said, "What if we let you voice a monkey and sell the film to kids?" To which Sandler replied, "Include a trailer for a movie where I play my sister and you got a deal!" And thus was born Zookeeper: a PG-rated romantic comedy made solely for the enjoyment of children and idiots. 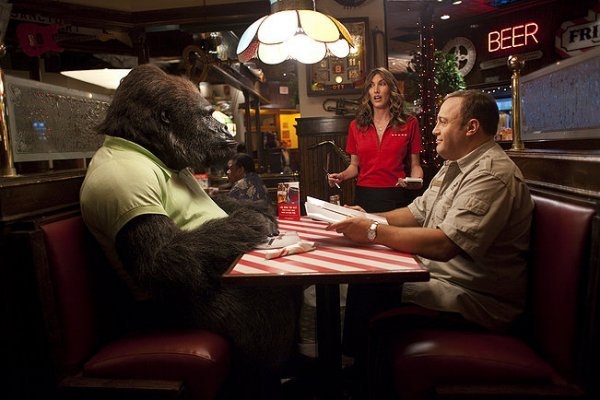 Hoho! A zoo animal in an unconventional situation!

The other thing that happened in the Writer's Room was that five men forgot that women love guys who love animals. I realize that's not always true, but Stephanie treats Griffin's job like it's beneath him, like being the top zookeeper in Boston is somehow comparable to being a janitor. She'd much rather he work at his brother's car dealership, like that's somehow more admirable than a job that requires years of education and training in order to keep hundreds of exotic animals from dying every day.

In a film full of characters who don't make any sense, Stephanie is easily the worst. Her motivation for not wanting to marry Griffin is silly on its own, but then over the span of ninety minutes, she waffles on it five or six times. First she's put off by his job, then later she thinks working with animals is fucking adorable and asks for a private tour. In a twist straight out of an O. Henry story, this change of heart prompts Griffin to consider quitting his job. Why? What could he possibly gain from quitting a job that she clearly (for now, at least) thinks is cute? Of course, thirty minutes later she tells him to his face that she thinks his job is demeaning. What the hell does this girl have against zookeepers? Does she work for PETA or something? 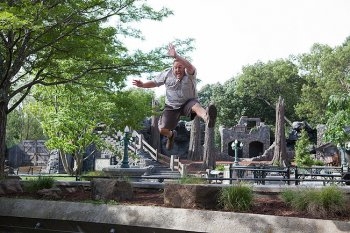 And then the fat man fell to his death.Elsewhere in the film, we get to watch all the zoo animals hold meetings on how best to help Griffin get back together with Stephanie. This is the most we ever see of the talking animals (thank god). Beyond their weird Council of Exotic Animals, each animal gets one quick scene with Griffin where it tries to teach him its trick to securing a mate, and then we never see them again. You'd think that with such A-list talent as Sandler, Sylvester Stallone, Cher and Jon Favreau, the movie could have found each of them at least one interesting thing to say to somebody. But no, a lot of it is pointless bickering with no bearing on the plot, and occasionally a joke about flinging poo.

A lot of my problems with this movie boil down to nitpicking over details that don't really matter. For instance, while parts of the film were shot at the Franklin Park Zoo in Boston, other parts were clearly shot on a set, and the zoo set is the most poorly designed zoo I've ever seen. Nothing is stopping a bear from climbing over its tiny little fence and mauling a child or Leslie Bibb. When I first noticed it I thought it might be a plot point later on, but it's really just poor set design. Also, why is Ken Jeong in this movie for 30 seconds? For that matter, why is he in every single movie?

Most folks don't think about or even notice this stuff when they watch movies, but when the movie is as dramatically inert and unfunny as Zookeeper, I have to start noticing this stuff or else my brain might shut itself off out of boredom. Nitpicking aside, fixing all the little broken details won't save the movie from being a badly written, unfunny romantic comedy without an audience. I can't imagine any children enjoying this, and the ones that do should probably be put on a government watch list. There's no telling what kind of twisted menaces those children might become.

MINORITY REPORT: Being That Fat Guy from King of Queens is much more demeaning than being a zookeeper. They should do a film where someone refuses to marry Kevin James because he's Kevin James. They could even get an actual zookeeper in a fat suit to play Kevin James. - Ian "ProfessorClumsy" Maddison