Mask of the Phantasm: The Wild Card

Let's just go ahead and get this out of the way now: I don't like Batman. I have Batman books. I watch Batman cartoons. I've played Batman video games. But as a character, I find Batman to be an insufferable, delusional man-child whose heroic deeds are lessened by their purely selfish motives. This is a point I've always been very vocal about. So when I'm asked to take on a topic that is known for making fans completely and totally insane, and I'm already open about my hatred for said topic, I take the cowardly route. To hell with journalistic integrity. 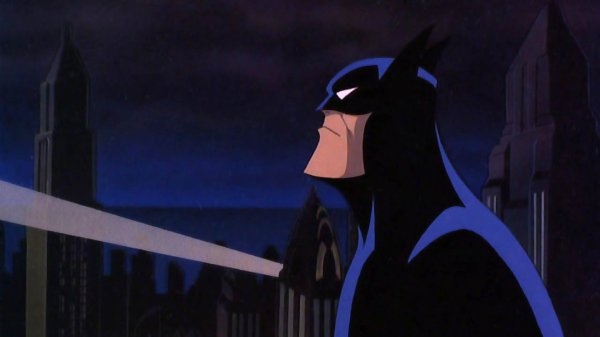 Why are you looking at the light? It just looks like the blob on your chest.

The cowardly route, in this case, is reviewing the Batman film I love the most, and the only one in which I actually care about Batman. 1993's Batman: Mask of the Phantasm is the only animated Batman film to earn a theatrical release, though that decision was made at the last minute, presumably when some executive at Warner Bros learned for the first time that people seem to like this Batman thing. The story takes place in multiple timelines. First in the present day-'90s, a new vigilante shows up in Gotham and begins killing off mob bosses. Batman (Kevin Conroy) is of course blamed for this, because surprisingly not everyone unconditionally trusts the dude who runs around at night in a mask beating people up. The second timeline flashes back to Bruce Wayne's first year as Batman, and his doomed romance with Daughter Of Important Gotham Businessman Andrea Beaumont. (Dana Delany, who has also been the voice of Lois Lane for the past twenty years or so. So while Batman may not be able to beat Superman, he can still take his girl.)

First, a note about the animation. Remember that this project came out of what was essentially a Saturday Morning cartoon, and yet Bruce Timm's team of animators created a product that still looks top-notch twenty years later. Given their expanded freedom, they took no shortcuts with details. For example, not only do we actually see punches connect with complete follow-throughs, but also when Bruce misses and hits a wall, he actually shakes his hand in pain for a split second. It's a tiny detail that could have been easily omitted, but the decision to include it makes a great little character moment. In fact, much of this movie makes use of the freedom of animation to build characters. While everyone and everything else is dark, flat, and fairly realistic, the animation quality and character design of The Joker sticks out simply because his coloring is much brighter than anything else in the movie. He moves like a more traditional Bugs Bunny-style cartoon character; whereas everyone else runs, he zips and dashes in a way that no live action actor could. This is why perhaps it's cheating to say that Mark Hamill's performance is the best of the on-screen Jokers, but his voice work is so damn good that it's still true. 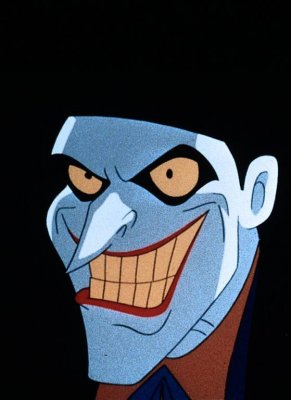 Oh, it's that tricksy jokester again. Look out for his funny jokes!A great deal of the reason I enjoy this film so much is that it's one of the only times we really focus on the issues of Bruce Wayne -- namely the fact that he may be completely insane -- in any real sort of depth. Within the first ten minutes of meeting Andrea, she basically points out to Bruce that he's not the only kid whose parents have died, at least he gets to be rich while it happens. This is somewhat of a theme, people close to Bruce calling him on his bullshit. When present-day Batman asks Andrea if she's still working for her father, she cooly responds "The only person controlled by their parents here is you." Which is such a great line, I expected The Joker to run into the scene, yell "OHHHH, BURRRRN!" and run out.

However, the character who gains the most from the multiple timelines is Alfred. We see the physical toll that watching over Bruce has taken on him, as he goes from dark-haired in the past to completely white in the present. He also switches from desperately trying to get Bruce to stop his insane quest, get some therapy, and live a life like a normal human being to "Oh Master Bruce. It appears that you're completely insane and I'm an enabler, but that's okay!" Finally, as a point I can't really put anywhere else, I find it very interesting that the first murder the Phantasm commits is very much in the same vein as the broken "I'm not gonna kill you, but I don't have to save you" mentality that we see in our current Bat.

The only real flaw to Phantasm is its extreme predictability, but that's almost forgivable when you factor that the target audience here was 11-year-olds. (Which makes the level of violence in this film truly fascinating.) However, there's a scene in the film where Bruce breaks down in front of his parents' grave and basically admits "Yeah, I'm insane. I could help Gotham in so many other ways, but I'm literally mentally unable to stop doing this." Then, of course, in the very next scene, he stops doing it. And, of course, something bad happens. Even if the rest of the movie consisted of Adam West Batusi-ing all over stately Wayne Manor for 67 minutes, that one scene would still make it the best Batman movie we've ever had.