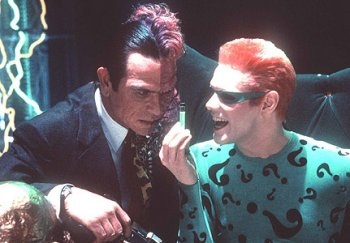 Meanwhile, in the hideout of those crooked crooks...I am often accused of being a contrarian. This is because I am. Not on purpose, mind you, it just seems to work out that way. Maybe I'm crazy or maybe everyone else is. Based on that, it shouldn't surprise you to learn that I'm quite fond of Joel Schumacher's Batman Forever and Batman & Robin, even though they were poorly timed, misguided and weird. Every Batman fan thought that Tim Burton's works were a step in the right direction, toward the grounded crime-thriller aesthetic of Christopher Nolan, but Schumacher's films represented a massive about-face back toward campy '60s-TV silliness and the idea that comics were for kids. Batman fans didn't like that one bit. Did you, Batman fans?

It's nice to see that in the modern context, a lot of people are prepared to reassess Schumacher's efforts, probably because the fans are now getting what they want from Nolan's films and aren't as angry about these ones anymore. They come from that special time in the mid-'90s where the scale of everything was huge. City streets were built on sound stages, enormous painted backdrops accompanied skyscraper-roof sets and every scene took place in some new expensive locale. These Batman films took place at the height of toymania; every character is a toy with a host of accessories and a vehicle to drive through walls and off sweet ramps. To use a phrase that Schumacher himself coined to describe the designs of his film, everything is "toyetic".

Of course, by making everything toyetic you're appealing to a particular age group, and this is where things get interesting, given that both of Schumacher's films introduce themes of sexual development into the mix. Forever does this via Batman's (Val Kilmer) relationship with Dr. Chase Meridian (Nicole Kidman) as she finds that the two men she loves are broken parts of the same whole. In Batman & Robin, these themes come through much more coherently, and I would argue that the whole thing is basically a perfected version of Forever.

Where Forever falls down is in its third act, which is hugely anti-climactic. Batman and Robin go to an island, climb up a ladder, break a huge egg timer and murder Two Face (Tommy Lee Jones) by throwing some coins into the air. Compare that to Mr. Freeze (Arnold Schwarzenegger) freezing the entire city and having a fist fight with Batman on top of a giant penis. That's not to say that either film is a masterpiece, but Batman & Robin is a better indicator of what Schumacher was doing with the franchise. 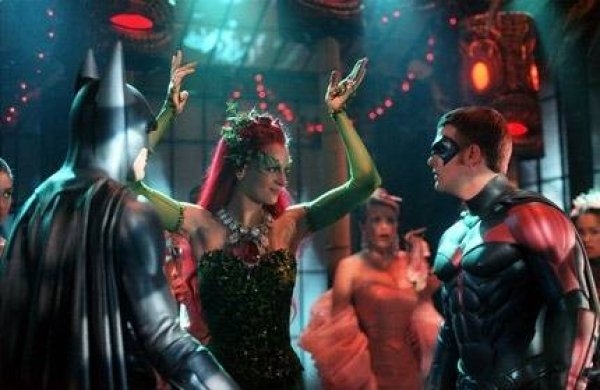 This is going to get weird.

So why didn't the fans like it? Because it wasn't for them. These films were for the kids in the audience. Batman fans wanted a film that appealed to and evoked everything that they loved about a guy dressed as a bat fighting crime. In the comics, the idea had already been legitimised and presented in a mature way. Batman fans wanted that in film form. Even Joel Schumacher himself wanted to make a film based on the Frank Miller story Batman: Year One, but the studio pressured him into making Batman & Robin instead.

Ultimately, I think that Schumacher's Batfilms are unjustly disliked and should at least be appreciated for how absolutely mental they are. Yeah, okay, so it's not your Batman and Batman would never do that and Mr. Freeze would never say "Ice to meet you," but who cares? Try to remember a time when toys were for playing with and not for collecting and try to remember that Batman is an absolutely ludicrous idea that is surprisingly versatile.