It's the spookiest day of the year and that can only mean one thing; a hugely successful horror-movie franchise churning out a so-called "final chapter" in 3D, in hopes of making just a few million more dollars. This year, Saw 3D takes centre stage, as Ian "ProfessorClumsy" Maddison is plucked from the audience and massacred for all to see. In other horror-related news, Joseph "Jay Dub" Wade is unmoved by Monsters, and John Landis (An American Werewolf in London) returns to the big screen with his knee-slapping dark comedy Burke and Hare.

Never Saw That Coming! Get it?

EXPECTATIONS: I enjoyed the original Saw a whole lot, but I have never watched any of the sequels on the pretext of "why watch a sequel to a Danny Glover movie that doesn't have Danny Glover?". It's a lame pretext, I know, but I can't help it. Trailers for Saw 3D, with that ridiculous scene of the giant pulling people out of the audience, almost made me think that maybe they've found some new and interesting way of using 3D. But, then I remembered that it would be physically impossible to do that. So, mixed feelings overall.

REALITY: Saw 3D: The Final Chapter is like watching an interesting horror film being edited into a terrible, badly acted detective show. Remember the original Saw? By which I mean, do you remember the first time you saw it, before all the sequels existed? That was something else, wasn't it? A horror film so devoted to exploring its central idea that every single moment of the film lent itself perfectly to this exploration. Remember how the victims were forced to question the value of their lives and how the value of the life of the antagonist was also brought to light? Plus, it had Danny Glover as the hero and the most deservedly smug-sounding theme tune you could hope to hear. Well, it seems that the Saw franchise has not only lost its way, but also it can't even remember its first installment. It's grown content with bombarding us with gore, ridiculous soap-opera storylines and plot twists that don't even make sense, so long as they play that theme tune at the right moment to make us all think that they're still being clever. 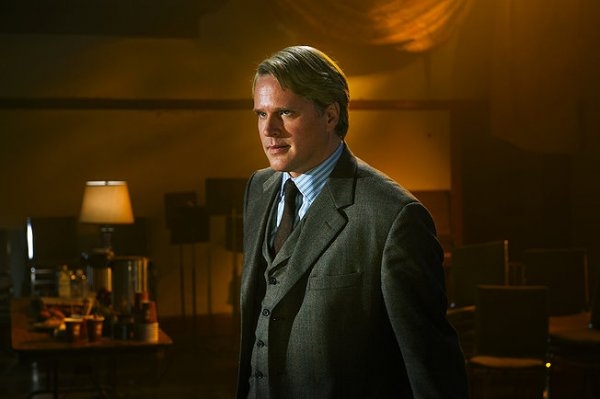 Cary Elwes returns, because let's face it, he's Cary Elwes. It's not like he can afford to turn down work.

To start with, I should say that my initial concerns of not being able to follow Saw 3D's supposedly labyrinthine plot were completely unfounded. One of the film's very few saving graces is that it successfully establishes context for the characters and situations. I would much prefer that they hadn't bothered, because it perhaps would have given me a little more to think about than just how utterly disappointing the whole affair was.

Don't get me wrong, there is a smattering of entertaining material. The idea behind the central trap is clever, and it explores its theme to a logical conclusion, but the entirety of the interesting horror narrative exists solely to serve as a distraction for the bad guys to do their wicked business unseen, which kind of undermines the whole point. Hold on... I heard a noise downstairs. Shit, did Montague get out?

Sorry, I'm dictating this into one of those speech-to-text program thingies, they're very clever and plot-convenient, it's just that... wait... there it is again.

Monty? Hey! Did you get out?

Must be my imagination. I have to keep Monty Smythe locked in a padded cell in the basement because of the obvious dangers of having someone like him around. He's normally content to stay in there, writing his minority reports on the walls in his own feces 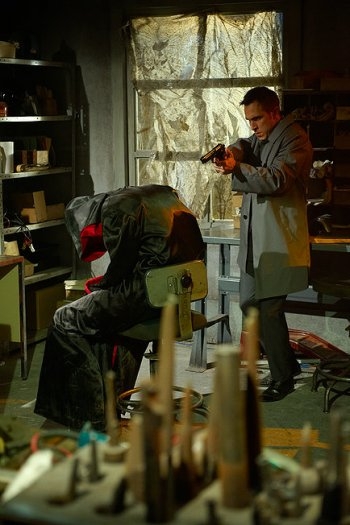 Shooting sleeping people to wake them up. Did they teach you that in the acting school you never went to?Okay, where was I? So it seems there is dissent amongst Jigsaw's disciples due to Detective Hoffman (Costas Mandylor) taking the teachings of the Jigsaw School of Game Design just a tad too far, evoking the wrath of Jigsaw's mentally unstable wife and her reverse bear trap (which is not used to free bears, in spite of what the name implies). Hoffman is able to escape the trap and vows revenge, which obviously requires some kind of twisty plot structure involving the deaths of a gang of racists and another fiendish puzzle for a new protagonist.

Bobby Dagen (Sean Patrick Flanery) is an author peddling his new book with the help of his team of soulless publicists and his naive wife. His book is based on his terrifying ordeal surviving one of Jigsaw's elaborately fiendish traps by jabbing meat hooks into his chest and hoisting himself up to the ceiling; an inspirational tale. One day, he awakens to find himself in a new trap, one that was built to reflect his lie. You see, he never really did any of those things, he just fancied writing a book. So he is put to the test to see if he is has the mettle and strength to sustain what he claims to have done already. It's an interesting idea, but it takes up roughly thirty per cent of the whole film and is abandoned long before the nonsensical ending comes along.

Another failing of the film is its insistence on using over-the-top gore to punctuate every on-screen occurrence. It just feels like they're trying to one-up the previous films. Everything end in gouts of blood and fleshy chunks flying at the screen; it's that really loud blood too, the kind that only exists in films. I wouldn't mind so much, a bit of gore can go a long way, but by the end you'll just find it disappointing when ridiculously violent things continue to happen. Remember the shotgun-over-the-door trick from the first film? Well Jigsaw's clan has upgraded to remote-controlled machine-gun turrets now. That should give you some idea of the increasing level of ridiculousness on display here.

Wait, what's this? An old Victrola with a scratchy record ready to be played? How curious that I would find this thing at this time and say these things out loud to myself. I guess I'll play it.

It's Montague Smythe here and I'd be immensely appreciative if you would engage in some larks for my amusement, what? You find yourself sat at your computer, concocting a review for the latest moving picture show entitled Sawed 3 and so I must make it abundantly clear that that Jiggery-Pokery character is based entirely on my own exploits.

My God, you monster! How have you been getting away with this?

Getting away with what?

You know. The murders and that.

I don't know what you're talking about. Those people disappeared of their own free will and I never even heard about it. I was busy at the time, fighting the American Cavalry in Vienna.

Can you hear me? I thought this was a recording.

No. Now listen up, sonny. I want you to admit publicly to your billions of subscribers that I was the original Sawman and that these films are an act of direct intellectual property theft.

HAHA! Take that, you daft bugger! Have a toffee hammer to the ribs! Now I am free of this living hell! And I must go in search of Kevin Greutert for making terrible films about my deeds that I didn't really do to people who may or may not have existed. What?

MINORITY REPORT: Monty, this was your test. Your game. I was testing you. You've claimed to be the originator of my philosophy, even though I have blueprints for a penis-shredder I drew in 1992. You are an impostor, a pretender to the throne. But your games are unwinnable, your subjects merely victims. In my desperation, I decided to give you one last chance. So I put everything in place. Ian, upstairs, writing his review of the latest chronicle of my postmortem adventures (which was underwhelming, to say the least). You didn't know that Ian knew the code that would unlock his front door from the inside. Or that I cemented over his windows, the door to the cellar, his back door, the door to the attic -- any means of escape that could keep his house from becoming your tomb. Also, I ate his SIM card, severed the land line, added insulation to the walls so no one could hear your pounding or shrieking, installed one of those fancy noise-cancellation units they sell in Japan, paid for and disconnected his utilities in advance so no helpful technician would drop by, killed his entire family and all of his co-workers (again, no unwanted visitors), bought his house, filed with the council to have this property condemned and canceled his subscription to The Evening Gazette. Oh, and I disconnected his smoke alarm and ... these are all unimportant details. Your bloodthirst has backfired, Monty, and now this house is sealed ... forever. Game over. -Sean "The REAL Jigsaw" Hanson